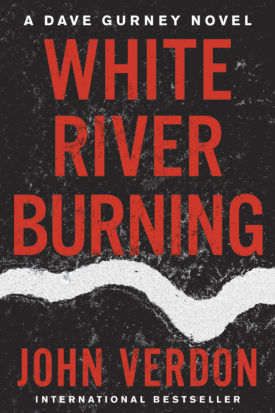 Tensions have been running high in White River as it approaches the anniversary of a fatal shooting of a black motorist by a local police officer. The polarized city is on edge, confronted with angry demonstrations, arson, and looting. In the midst of the turmoil, a White River police officer is shot dead by an unknown sniper. As the town spirals out of control, local authorities approach Dave Gurney to conduct an independent investigation of the shooting.White River Burning is the most provocative and timely book yet by the author hailed by The New York Times as “masterly.”

JOHN VERDON is the author of the Dave Gurney series of thrillers, international bestsellers published in more than two dozen languages: Think of a Number, Shut Your Eyes Tight, Let the Devil Sleep, Peter Pan Must Die, Wolf Lake, and White River Burning. Before becoming a crime fiction writer, Verdon had two previous careers: as an advertising creative director and a custom furniture maker. He currently lives with his wife, Naomi, in upstate New York.

One of Publishers Weekly's Best Summer Reads of 2018

“John Verdon writes grown–up detective novels, by which I mean stories with intelligent plots, well–developed characters and crimes that have social consequences. White River Burning, featuring the author's brainy gumshoe–for–hire, Dave Gurney, checks all these boxes . . . While keeping inside the lines of a classic whodunit plot, Verdon enriches the formula with a probing analysis of the way a community rips itself apart.” —The New York Times Book Review

“Outstanding . . . The twisty plot builds up to a logical and satisfying reveal. Verdon expertly combines a baffling whodunit with thoughtfully drawn characters in this timely examination of racial tensions.” —Publishers Weekly (starred and boxed review)

“Verdon is a gifted writer and storyteller . . . He definitely nails the zeitgeist.” —Booklist

“It's easy to see why this series is so popular, blending as it does the hard–boiled social observations of noir fiction with the inscrutable pleasures of classic whodunit' puzzle–solving.” —Kirkus Reviews

“I am impressed by the risks John Verdon has taken with White River Burning. He boldly highlights the issues from each side, and is able to get the message across that sometimes things are not what they appear to be on the surface . . . Don’t miss this timely and sobering read.” —Bookreporter

Praise for the Dave Gurney Series

“Verdon is masterly at keeping Gurney [his protagonist] a step ahead of the reader [and] the murder itself is a pretty crafty piece of legerdemain . . . [The novel features] the kind of head–scratching setup that would get Sherlock Holmes off his cocaine [and] Gurney has the same precision, logic, and thirst for clarity.” —The New York Times

“A masterful bit of writing that builds to a surprising and satisfying climax. The tension and enigmatic situations created en route to the conclusion make this book a definite nail–biter. John Verdon's writing skill might well cause him to become known as 'The Puzzle Master.'“ —New York Journal of Books

“[An] inventive and entertaining first thriller. The hard–edged characters and gritty plot recall Chandler's 'mean streets,' but the ornate puzzles laid before Verdon's detective might have challenged the 'little grey cells' of Hercule Poirot.” —The Washington Post

“For anyone who loves a good puzzle, John Verdonʼs Shut Your Eyes Tight is the easy answer.” —CNN.com

“[Verdon has] brought back crimes of impossibility, starting with the titular parlor game trifle and escalating until we're deep into serial murder territory. Verdon is a master at controlling pace, illustrating the story of a rich but complicated marriage, pondering what it means to be sucked back into your life's work even if it might kill you, and demanding that the reader use his or her brain to figure out what comes next. When you're finished, you may not trust silly parlor games ever again.” —Salon

“Verdon's fourth Dave Gurney thriller (after Let the Devil Sleep) weaves a sophisticated and edgy web of suspense that mystery aficionados will love to help unravel. A taut plot filled with clever intrigue and unexpected twists will tantalize readers until its dramatic and startling conclusion.” —Library Journal (starred review)

“This novel has a hook worthy of any King creation: Four unrelated individuals in different parts of the country have the same nightmare, then appear to commit suicide. How's that for attention grabbing?” —Bookbub

“Why isn't John Verdon huge? Like household name huge? . . . This is a storytelling romp. Verdon has a very distinctive style, one that is slightly offbeat without being off–putting . . . Verdon is an author deserving of your time and attention; if you love mysteries, you owe it to yourself to read Wolf Lake.” —Bookreporter.com