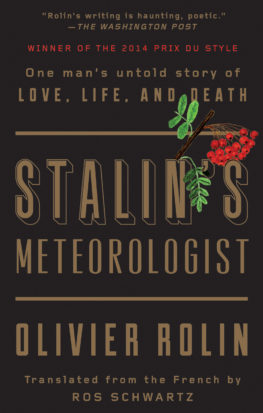 One Man's Untold Story of Love, Life, and Death

“Masterful . . . An eloquent addition to a violent episode in the history of science in the twentieth century.” —Nature

In 1934, the highly respected head of the Soviet Union’s meteorology department, Alexei Feodosievich Wangenheim, was suddenly arrested without cause and sentenced to a gulag. Less than a year after being hailed by Stalin as a national hero, he ended up with thousands of other “political prisoners” in a camp on Solovetsky Island, under vast northern skies and surrounded by water that was, for more than six months of the year, a sheet of motionless ice. He was violently executed in 1937—a fact kept from his family for nearly twenty years.

Olivier Rolin masterfully weaves together Alexei’s story and his eventual fate, drawing on an archive of letters and delicate drawings of the natural world that Wangenheim sent to his family from prison. Tragically, Wangenheim never stopped believing in the Revolution, maintaining that he’d been incarcerated by accident, that any day Stalin would find out and free him. His stubbornness suffuses the narrative with tension, and offers insight as to how he survived an impossible situation for so long.

Stalin’s Meteorologist is a fascinating work that casts light on the devastating consequences of politically inspired paranoia and the mindlessness and trauma of totalitarianism—relevant revelations for our time.

OLIVIER ROLIN's three books have all been critically acclaimed and have won prizes in France: Port Sudan won the Prix Femina in 1994, Paper Tiger won the 2003 Prix France Culture, and The Meteorologist was awarded the Prix du Style in 2014.

ROS SCHWARTZ is an English literary translator, who translates Francophone literature into English. In 2009 she was awarded the Chevalier d'Honneur dans l'Ordre des Arts et des Lettres for her services to French literature.

One of The Millions's Most Anticipated Books of 2018

"Rolin proves to be a comforting and companionable guide to a gruesome period of history. Although the past he takes us through is irredeemably bloodthirsty, he confidently leads us back to the present, a seeker of light in a world of uncompromising bleakness . . . [Stalin's Meteorologist] serves two functions: for readers to pay tribute to the victims by bearing witness to their oppressor's crimes, and to understand the measures dictators take to silence their enemies, even a devoted husband and father with his head in the clouds." —Los Angeles Times

"A powerful and important book." —Victor Sebestyen, The Mail on Sunday

"Olivier Rolin’s new biography, Stalin’s Meteorologist: One Man’s Untold Story of Love, Life, and Death, is one of tragedy, but also of resilience—the kind that allows a sensitivity and love for the wonders and mysteries of nature to survive the most oppressive, cruel circumstances." —Atlas Obscura

"Masterful . . . An eloquent addition to a violent episode in the history of science in the twentieth century." —Nature

"This outstanding book captures both the beauty and resilience of human nature, while also documenting its most heinous side. Winner of the English PEN award, it is immaculately researched and written . . . compassionately and with insight." —The Lady, Book of the Week, July 7, 2017

"Timely and well–researched, the book is a reminder of the real, human cost of blind loyalty to totalitarian political ideologies. A movingly illuminating biography." —Kirkus Reviews

"In this witty puzzler of a novel by Olivier Rolin (translated by Jane Kuntz), a traveler with the same name as the author begins each chapter with a description of a different hotel room he’s stayed in around the world. These, in turn, become occasions for Rolin (or 'Rolin'?) to tell us of his adventures as a globe–trotting amateur spy and dashing lover. Frenchman Rolin engages in literary game–playing in Hotel Crystal, crossing influences such as Vladimir Nabokov and Georges Perec." —Entertainment Weekly

"For all its robust wit and cosmopolitan embroidery, Hotel Crystal details a Dorian Gray–like descent into the bottle. Our man in Khatanga, Port Said, Helsinki, isn’t a spy so much as a 'scribbler with too much drink in him,' as Graham Greene so famously described Harry Lime’s antagonist. For the lonely souls who check into the Hotel Crystals of the world and anesthetize themselves with expensive booze and cheap paperbacks, the dreary rooms are a sanctuary from perils real and imagined." —Los Angeles Times

"Rolin’s mastery of language, along with his rich perceptions of locale and the human psyche, rewards a reader willing to attend." —Lee Fahnstock, World Literature Today

"One of the most enjoyable 'serious' novels in many seasons." —Kirkus Reviews

"Olivier Rolin is a towering figure in French literature . . . Rolin is a consummate artist who will speak profoundly to the American heart." —Robert Olen Butler, author of the Pulitzer Prize–winning novel A Good Scent from a Strange Mountain

"Martin, an aging French radical from the 60s, wonders where it all went and why. One night in 2000, when this rushing stream of a book is set, he broods out loud while driving around (and around and around) Paris with Marie, the 24–year–old daughter of his best friend from 'the Cause.'. . . [T]here are also treats that make the car ride worth taking, some serious . . . and others delightfully comic . . . When the journey to the end of the night is over, the impression left behind (at once comforting and disturbing) is that history will make a paper tiger of every high hope and feared foe alike, no matter how seemingly imperishable." —Alison McCulloch, The New York Times Book Review