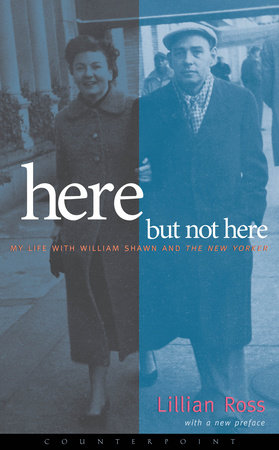 Here But Not Here

In this memoir, a renowned journalist tells the remarkable story of the passionate life she shared for 40 years with William Shawn, legendary editor of The New Yorker.

Shawn was married, yet Ross and Shawn created a home together a dozen blocks south of the Shawns’ apartment, raised a child, and lived with discretion. Their lives intertwined from the 1950s until Shawn’s death in 1992. Ross describes how they met and the intense connection between them; how Shawn worked with the best writers of the period; how, to escape their developing liaison, Ross moved to Hollywood–only to return to New York and to the relationship.

Lillian Ross joined the staff of The New Yorker in 1945, during the Second World War, and worked with Harold Ross, the magazine’s founder and first editor. She began as a "Talk of the Town" reporter and, over the course of her career, she has written hundreds of pieces, contributing to nearly every section of the magazine.