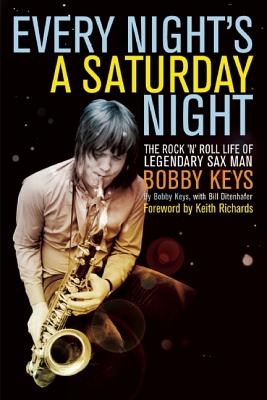 Every Night’s a Saturday Night

Born in Slaton, Texas, Bobby Keys has lived the kind of life that qualifies as a rock ‘n’ roll folktale. In his early teens, Keys bribed his way into Buddy Holly’s garage band rehearsals. He took up the saxophone because it was the only instrument left unclaimed in the school band, and he convinced his grandfather to sign his guardianship over to Crickets drummer J.I. Allison so that he could go on tour as a teenager.

Keys spent years on the road during the early days of rock ‘n’ roll with hitmakers like Bobby Vee and the various acts on Dick Clark’s Caravan of Stars Tour, followed by decades as top touring and session sax man for the likes of Mad Dogs and Englishmen, George Harrison, John Lennon, and onto his gig with The Rolling Stone from 1970 onward. Every Night’s a Saturday Night finds Keys setting down the many tales of an over–the–top rock ‘n’ roll life in his own inimitable voice.

Augmented by exclusive contributions with famous friends like Keith Richards, Joe Crocker, and Jim Keltner, Every Night’s a Saturday Night paints a unique picture of the coming–of–age of rock ‘n’ roll.

Bobby Keys has been an in-demand session and touring saxophone player since the 1950s. He has toured and recorded with the Rolling Stones since 1970, and has played on record or onstage with Elvis Presley, Buddy Holly's Crickets, Joe Cocker, Eric Clapton, John Lennon and Yoko Ono, George Harrison, Ringo Starr, Keith Moon, Warren Zevon, and Sheryl Crow, among countless others. He lives in Nashville, Tennessee.

Bill Ditenhafer is the former editor of Nashville Lifestyles magazine and has worked as a features writer, arts writer, critic and editor at weekly newspapers from Nashville, Tennessee to Warsaw, Poland. He lives in Nashville with his wife and two children.
Praise
Praise for Every Night's a Saturday Night

"It's not a tell–all, but it doesn't pull any punches. It's
laugh–out–loud funny, but it doesn't take cheap shots. It's searingly
honest…"—Michael Heaton, Cleveland Plain Dealer

"Every Night's a great romp that is almost more of a history of modern
rock than it is a look at the life of Bobby Keys. That also makes it
an enjoyable and fascinating read for anyone who loves classic rock,
as well as for folks who grew up on the genre."—Hank Gilman, Fortune.com

"His conversationally straight–shooting autobiography has its share of
saucy, on–the–road tales…But there's also plenty of engrossing detail
on his rise through the ranks in the ‘60s tour bands…"—Richie Unterberger, Mojo