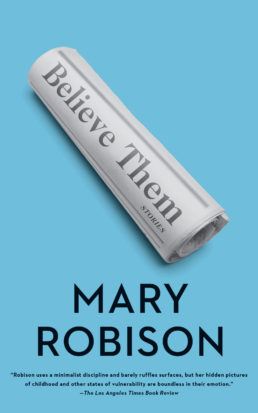 “Robison uses a minimalist discipline and barely ruffled surfaces, but her hidden pictures of childhood and other states of vulnerability are boundless in their emotion.” —The Los Angeles Times Book Review

The eleven stories in Believe Them, most of which first appeared in The New Yorker, depict Mary Robison’s sly, scatty world of plotters, absconders, ponderers, and pontificators. Robison’s take on her characters is sharp, cool, astringently ironic, and her language vibrates with edginess and nerve. With what John Barth has called her “”enigmatic superrealism,”” Robison flashes entire lives by us in small, stunning moments—odd, skewed outtakes from real life. Believe Them confirms Mary Robison’s place as one of America’s most original writers.

Praise
"Sorrow and pain are underground messages in these finely made stories . . . Robison uses a minimalist discipline and barely ruffled surfaces, but her hidden pictures of childhood and other states of vulnerability can be boundless in their emotion." —Richard Eder, Los Angeles Times Book Review

"Robison's methods allow the careful reader an honest perspective into lives usually dealt with either melodramatically or contemptuously by other authors." —Larry McCaffery, The New York Times Book Review

"Cool, carefully honed prose distinguishes [these] 11 stories. As usual, she writes with a simplicity and directness that seem innocuous but actually allow startling phrases to leap out at the reader. Robison specializes in eccentric but engaging characters whose personalities are revealed through whimsical dialogue." —Publishers Weekly