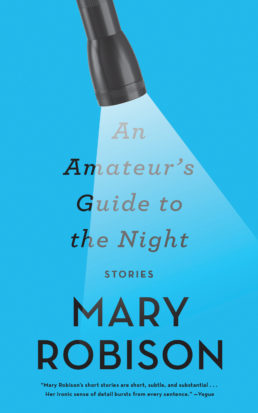 An Amateur’s Guide to the Night

“Mary Robison’s short stories are short, subtle, and substantial . . . Her ironic sense of detail bursts from every sentence.” —Vogue

An Amateur’s Guide to the Night stands as a perfect example of Mary Robison’s beloved narrative style: purposeful, clipped, and devastating in its restraint. Reflecting on the life of disaffected youth, these stories speculate on how they often manage to remain deferent towards the rest of society–and document how spectacularly they often fail. “These thirteen stories are glimpses from a moving train into lit parlors, dinettes, bedrooms and dens . . . Think of Robison as the engineer, blowing the whistle, calling the stops and starts; invisible when you want to ask her why we’re stalled here in the middle of nowhere, between stations, jobs, relationships and decisions.” —Los Angeles Times
About Mary Robison

Praise
Praise for An Amateur's Guide to the Night Recipient of the 2018 Arts and Letters Award in Literature "Mary Robison's short stories are short, subtle, and substantial . . . Her ironic sense of detail bursts from every sentence." --Vogue "The writing is cool and detached, controlling a breathtaking compassion. Her subjects and characters, mostly family members, are right out of life. An Amateur's Guide to the Night continues Robison's practice of penetrating the heart. There is not one story in this collection that does not evoke an emotional response . . . It's an intimate, enriching experience." --San Francisco Chronicle "These thirteen stories are glimpses from a moving train into lit parlors, dinettes, bedrooms and dens. Though the rider sees only fragments, he can intuit essentials from posture, from motion, and see the space that characters inhabit. Think of Robison as the engineer, blowing the whistle, calling the stops and starts; invisible when you want to ask her why we're stalled here in the middle of nowhere, between stations, jobs, relationships and decisions. Like Ann Beattie, Robison shunts the reader off the mainline to a limbo where everyone waits for something to begin or end. As narrative, the stories are inconclusive; as commentaries on the way Americans live now, they're absolute and final." --Los Angeles Times "It's my hope that An Amateur's Guide to the Night will win her the readership she deserves. No American short story writer speaks to our time more urgently or fondly than Robison." --David Leavitt, Village Voice "Hip, deadpan, it's-cute-to-be-crazy stories from the author of Days and the novel Oh!--with vague grim undercurrents beneath the bright little pop-artish sketches of disaffected youngish people." --Kirkus Reviews Praise for One D.O.A., One On The Way "A riveting read." --O, the Oprah Magazine ". . . One D.O.A., One on the Way has all the razored style and zigzag tone one expects, but also a new connection to a bigger world, in which all of our circumstances are as desperate and hilarious as her characters' . . . Mary Robison's work has always felt like a glorious amenity, but One D.O.A., One on the Way is a powerful necessity." --The New York Times "Robison could work for a food or drug packager: she squeezes dire warnings into tiny spaces . . . [One D.O.A., One on the Way] can be read in half an afternoon, leaving plenty of room for afterthoughts about Robison's funny and heartbreaking conversations." --The New Yorker "[Robison is] a smart, brittle novelist . . . [capturing] in swift, acute sentences the comic hostilities of in-law relations, or the difficulties of caring for the chronically ill . . . With her lists, one-liners, and bullet points, she is a kind of bard of America's most popular suburban affliction, attention deficit disorder." --Times Literary Supplement "Mary Robison is a woman of few words. But what powerful words they are . . . Pushcart Prize and O. Henry Award-winner Robison's searing novella is rendered in edgy vignettes . . . Robison is a master at delivering dark scenarios with mordant wit. One D.O.A., One on the Way is an impressive addition to her ouvre, by turns horrifying, comic, shocking, and wise." --The San Diego Union-Tribune "With a laconic voice and a despairing sense of humor, film location scout Eve Broussard narrates award-winning Robison's grim yet witty novella about the dissolution of a family and a city in the wake of Hurricane Katrina . . . Robison's narrative is jumpy but effective, interspersed with and informed by startling statistics." --Publishers Weekly "Robison's spare, hilarious dialogue and collection of fragmented images, moments and excerpts call on readers to fill in blanks and to organize what looks at first glance like chaos glimpsed from a moving car . . . a vivid, witty ride." --Kirkus Reviews "Robison eloquently reveals the dissolution of a family . . . The southern novel's bread and butter are rich descriptions, thick as humidity and Spanish moss." --Booklist Praise for Tell Me: Thirty Stories

"Robison's talent for observation makes for microscopic wonders of details: the menu items at a cheap diner in Providence, R.I.; the furnishings of a Laundromat, and the text of gift-wrap stickers ('Grin and Ignore It, ' 'Things Are Getting Worse--Send Chocolate!'), in small-town Ohio." --Chicago Tribune