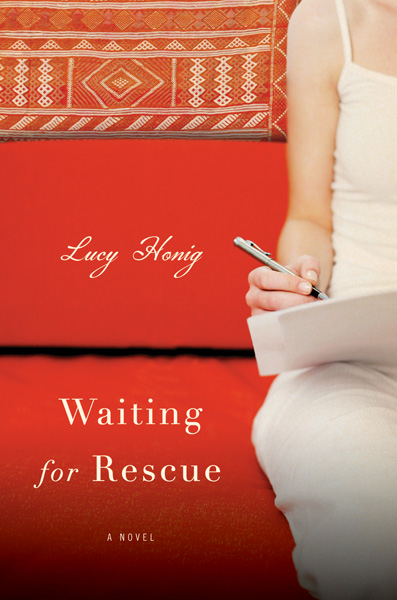 Jarring yet slyly comic, Waiting for Rescue evokes a world turned upside down after the events of 9/11 as seen through the eyes of a wry and observant American woman who, though far from the path of the hijacked planes, is thrown into turmoil nevertheless. As a teacher in Boston working with health professionals from around the world, her sudden grief and sense of impending violence gradually pervade every facet of her life and change forever her understanding of the “good works” her colleagues and her students believe they do.

In Honig’s global landscape, the paths of vastly different people crisscross with the narrator’s: a Muslim family in America dealing with cancer, then ethnic profiling; an aging researcher hoping to make his mark in bio–terror’s next big thing; a feisty girl in Kenya whose parents have AIDS; a nerdy high school teacher who commits a terrible crime that returns to haunt, decades later.

Everywhere the author takes us — the classroom and the bedroom, in hallways of hospitals and the offices of ambitious researchers, in the slums of Nairobi and the streets of Boston, at office parties and bedside vigils — events intersect in a unique commentary on the imbalances of our times.

Lucy Honig was the author of the novels Waiting for Rescue, Picking Up, and The Visitor, and the story collections Open Season and The Truly Needy and Other Stories. Her work has been published widely, featured in two O. Henry Prize collections and in The Best American Short Stories. She was the recipient of the 1999 Drue Heinz Literature Prize and lived in Massachusetts.

"The events of 9/11 provide a somber backdrop for the complex yet realistic interactions dramatized in this concise, densely packed novel. Erika, a mature woman, teaches writing to students in the health professions, many of them from other countries. Her skilled and personal teaching encourages close links. One Muslim student develops cancer, while his brother–in–law is unjustly detained as a terrorist. Others propose preposterously overblown topics for research papers in an attempt to delineate and perhaps solve the problems of the world. A study initiated by her department observes but doesn't aid the poor in Nairobi's slums. A convicted murderer, someone from her past, is in the vicinity, and his son is a member of her department. While it seems that there is too much going on for cohesion, the writing is so clear and expressive that the disparate story lines somehow come together to form a whole. The Boston setting distances the fear and dread engendered by the 9/11 attacks, but only slightly. There are no solutions here, just strong and genuine feelings." —Booklist

Although the novel takes place in Boston rather than New York City, the shadow of the events of 9/11 looms over the urban landscape. Erika teaches an international group of health professionals and has them write research papers relevant to their personal and political interests, but she also broods on the meaning of the events of 9/11. Her students become aware that academic research and writing are too abstracted from real life, a point driven home by Honig as she switches the narrative to scenes in Nairobi, where dreadful exploitation and unimaginable violence are being visited upon children as young as 12. This theme of distancing oneself from the real world pervades the novel, particularly through characters such as Nussbaum, a bully who's named chair of the department and who's preoccupied with his own petty power, and Toby, who writes grants for sociological studies in Africa but who has never been there himself. In response to the social evil found in Kenya one character tries to help those who are being oppressed and is fired for violating rules meant to ensure "objectivity." The most touching character is Ibrahim, a Sudanese doctor to a sheik. Ibrahim is kind, loving and curious, but he's stricken with cancer, and his patience teaches Erika much about the process of dying. In an insult to his virtue, his brother–in–law is arrested on suspicion of–what else in this post–9/11 world?–terrorism. Honig constructs a world of goodness circumscribed by evil, of good deeds done in the context of overwhelming misery.

Though occasionally preachy, the novel is both heartfelt and moving." —Kirkus

"In prose alternately lyrical and pragmatic, Lucy Honig evokes above all the chaotic sense of vertigo that comes from suddenly feeling a shrinking Earth spin uncontrollably under our feet." —The Boston Globe

"Honig's prose smolders, curls like smoke off of the page. It's just one of those slow–burn books you can't get off of. So adjust your feelers accordingly, and, for godsakes, mind the gap." —Weekly Dig
Don't miss news & events from Counterpoint Press.
Subscribe to the newsletter today.