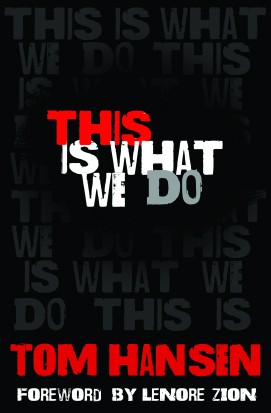 This Is What We Do

“[This Is What We Do] is…Atlas Shrugged jammed in reverse and with the tires smoked. It’s Ayn Rand for people with a brain. And a gun. It’s a kick. Read it.” —Sean Beaudoin, author of You Killed Wesley Payne and The Infects

James Nethery is at the end of his rope. Unable to find meaning in his comfortable life, he has cut himself off from everyone and fled to Paris. His mission; to rid himself of a lifetime of baggage, erase the past, and start over. He wanders Paris aimlessly until he meets Lily, a Ukrainian model and hooker. They form a unique bond, and together take the first steps toward writing new stories of their lives. Soon, Lily’s past catches up with her and they are forced to go on the lam in a strange country. Together they must decide between justice and vengeance, and, when forced to take action, between what is too much—and not enough.

This Is What We Do is part neo–noir thriller, part love story, and part cautionary tale of the perils of trying to write a new life from nothing—and the stories that will be written for you by others if you find yourself in the public eye.

Lenore Zion, an original contributor to The Nervous Breakdown, is the author of My Dead Pets are Interesting (TNB Books, 2011) and (Emergency Press, 2013). Zion does mostly TV writing now as a staff writer on Ray Donovan (2015) and story editor and writer on Good Behavior (2016-17). She created and wrote a show that's being picked up by Amazon. She lives in Los Angeles.

Tom Hansen was born and raised in Seattle, Washington. As a musician in the late 70's and early 80's, he was a pioneer in the punk rock scene in Seattle. Eventually, music gave way to heroin and he turned to dealing to support his habit. He got clean in 1999, returned to school and received an MFA from the University of British Columbia in 2008. He published his first book, the memoir American Junkie, in 2010.

Praise
Praise for This Is What We Do

"A tight retro noir that's as equally comfortable channeling The Stranger as it is George V. Higgins. But there's also a sly anarchic subtext rumbling below the drugs–and–molls narrative, a welling need to bring plutocrat America to its knees. Where, of course, it belongs. This Is What We Do is a love story. Or, to be more accurate, it's a story that's in love with its own existential indifference. But it's also Atlas Shrugged jammed in reverse and with the tires smoked. It's Ayn Rand for people with a brain. And a gun. It's a kick. Read it.” —Sean Beaudoin, author of You Killed Wesley Payne and The Infects

"Hansen's debut novel covers even wilder, trickier ground than his memoir, American Junkie. Anti–hero James Nethery seems an ordinary, lonely man drinking Coke at the bar, until he meets "Lily," a Ukrainian prostitute, and what began as a quiet, atmospheric meditation on down–and–out expats in Paris explodes into a nonstop, genre–blending noir–crime–vigilante–political–sexy–nihilistic–almost surreal thrill ride, infused in equal measures with brutality and beauty." —Gina Frangello, author of My Sister’s Continent, Slut Lullabies, and A Life in Men

"There’s what people say, and then there’s what they do. The phrase will infect your consciousness, contorting and twisting itself around to take on more and more dimensions. What does it mean to act on our desires when one person’s wish fulfillment means another’s nightmare? What does it mean to be free, or to escape? At its core, This Is What We Do gives us two people left with nothing, cutting close to the uncoolness of loving without fear." —Grace Krilanovich, author of The Orange Eats Creeps