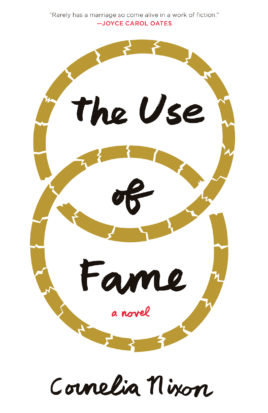 The Use of Fame

“Rarely has a marriage so come alive in a work of fiction. . . So intense, beautifully written, shining with ‘felt life,’ it is truly gripping—riveting.” —Joyce Carol Oates

Abigail McCormick and Ray Stark are both poets, married nearly twenty–five years in what has always been a passionate relationship despite deep class differences. Ray is the son of West Virginia coal miners and was abused as a child—but now he is a distinguished poet with a part–time position at Brown. Abby grew up in San Francisco’s posh Pacific Heights and, having abandoned poetry, she spends her energy on a new teaching position at UC Berkeley. Abby’s decision to accept the post sets the stage for Ray to stray, especially as he struggles with a heart condition.

He’s tortured by his affair with the graduate student he’s fallen in love with, but is determined to stay married—he fights to get over Tory for years. A despairing Abby finds solace in her return to riding horses and writing poems, but as she suffers privately, she becomes dependent on sleeping pills and alcohol. Ray’s health worsens—proves nearly fatal—and another cross–country move threatens to push them further apart. Alternating seamlessly between Ray’s and Abby’s perspectives, The Use of Fame is a gripping exploration of how closeness and despair can warp a lover’s perception.

Praise
Praise for The Use of Fame

“The reality of trying to make love last is shown with poise and grace, and all the situation’s complexity nuance rings true in Nixon’s honest prose and nuanced characters.” —Publishers Weekly

“[A] gorgeous examination of marriage and its discontents. Nixon, to my mind, deserves extra kudos for managing to make a marriage between two creatives (literature professor Abigail McCormick and poet Ray Stark) the stuff of imaginative, and not insufferable, fiction . . . Nixon has written something if not precisely modern, at least refreshing in its honesty.” —Bethanne Patrick, LitHub

“Told in brisk, unadorned prose, part of the compulsive readability of Berkeleyan Cornelia Nixon’s fourth novel, The Use of Fame, comes from its sly, sensuous descriptions of settings: Berkeley and the greater Bay Area; Providence, R.I.; and Miami. But the rest comes from its antic, Almodovarean breathlessness.” —San Francisco Chronicle

“Berkeley resident Cornelia Nixon’s fourth novel, The Use of Fame, tells the story of two married college professors and poets who live on opposite coasts and have a commuter marriage. Abby McCormick and Ray Stark have been together for 25 years despite their class differences (he comes from a West Virginia coal mining family and she comes from San Francisco’s tony Pacific Heights) but their passion has diminished and is threatened with extinction because of Ray’s affair with a much younger former graduate student. The book alternates between Ray’s and Abby’s perspectives, and, as Joyce Carol Oates put it, 'rarely has a marriage so come alive in a work of fiction.'“ —Berkeleyside

“Rarely has a marriage so come alive in a work of fiction. This novel has the power of intensely lived life and the authority of absolute authenticity. The sympathetic presentations of both wife and husband are beautifully drawn. So intense, beautifully written, shining with 'felt life,' it is truly gripping—riveting.” —Joyce Carol Oates