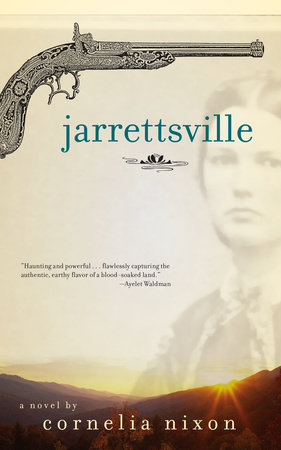 A novel of crime and passion in post–Civil War Maryland, based on a true story, from a “wonderfully talented” author (Michiko Kakutani, The New York Times).

Winner of the Michael Shaara Prize for Excellence in Civil War Fiction Based on true events from the author’s family history, Jarrettsville begins in 1869. Martha Jane Cairnes has just shot and killed her fiancé, Nicholas McComas, in front of his Union cavalry militia as they were celebrating the anniversary of the Confederate surrender at Appomattox.

To find out why she murdered him, the story steps back to 1865, six days after the surrender, when President Lincoln has just been killed by John Wilkes Booth. Booth belongs to the same Rebel militia as Martha’s hot–headed brother, who has gone missing along with the assassin. Martha is loyal to her brother, but in love with Nicholas McComas, a local hero of the Union cause—and their affair is fraught with echoes of the bloody conflict just ended.

Set six miles below the Mason–Dixon line, in a time when brothers fought on opposing sides and former slave–owners lived next door to abolitionists and freedmen, this is a compelling story rich with passion and tragedy, history and suspense.

Cornelia Nixon is the author of Angels Go Naked, Now You See It, and Jarrettsville, as well as a book of literary criticism. She has won two O. Henry Awards (one of them the First Prize in 1995), two Pushcart Prizes, a Nelson Algren Prize, and the Carl Sandburg Award for Fiction. She lives half the year in Berkeley, California, and half on an island in Puget Sound, Washington.

"Nixon has a thoroughly original voice, a voice that moves fluently from the poetic to the visceral, from the absurd to the mundane . . . [She is] wonderfully talented." -- Michiko Kakutani
Don't miss news & events from Counterpoint Press.
Subscribe to the newsletter today.