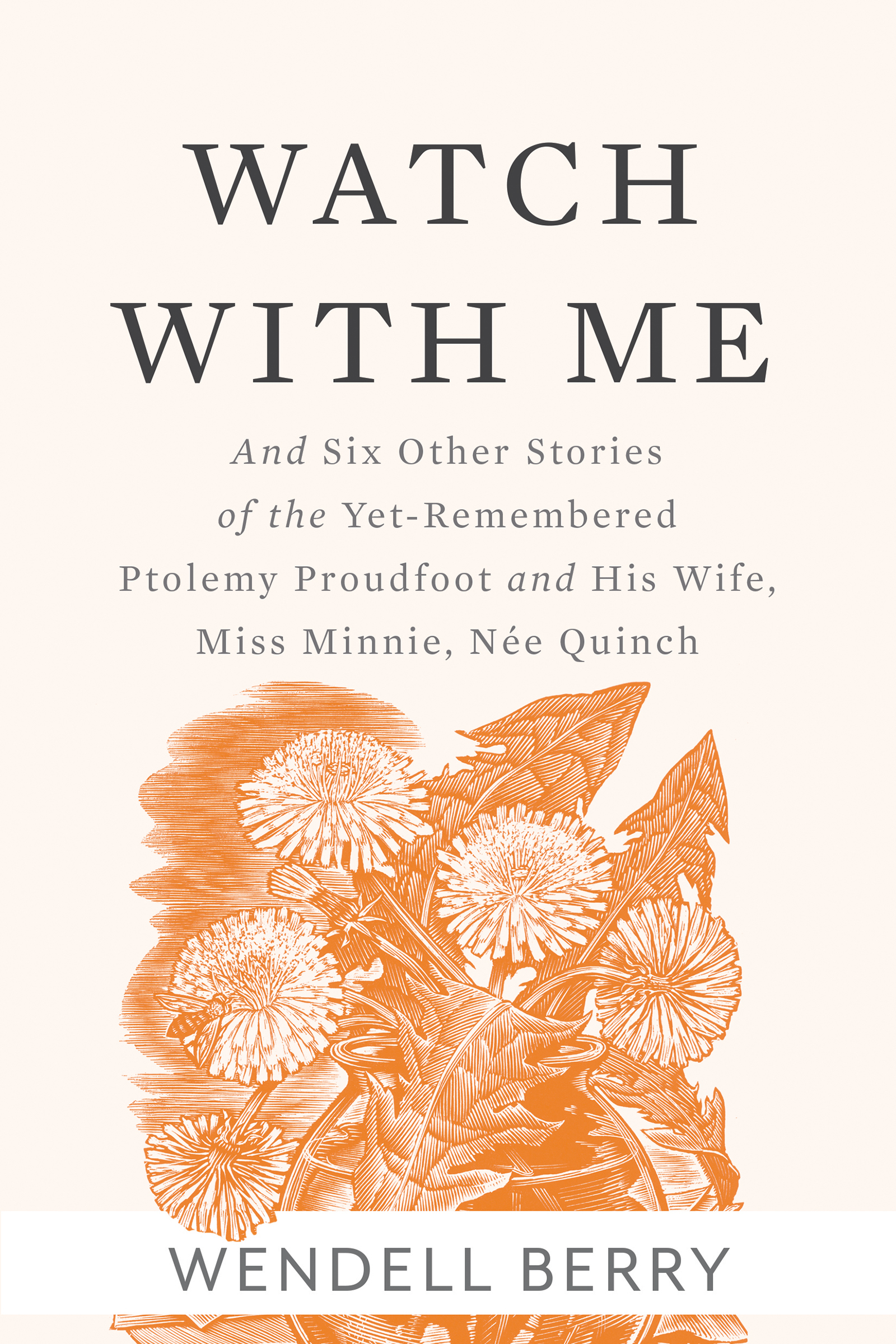 and Six Other Stories of the Yet-Remembered Ptolemy Proudfoot and His Wife, Miss Minnie, Née Quinch

This volume of six linked stories and the novella from which the book derives its title is set in Port William from 1908 to the Second World War. Here Wendell Berry introduces two of his more indelible and poignant characters, Ptolemy Proudfoot and his wife Miss Minnie, remarkable for the comic and affectionate range that—with the mastery of this consummate storyteller working at the height of his powers—here approaches the Shakespearean.

Tol Proudfoot is huge, outsized, in the tradition of the mythic. The three–hundred–pound farmer, personally imposing and unkempt, is also the most graceful of presences, reserved and gallant toward his tiny wife, the ninety–pound schoolteacher.

Their contrasts are humorous, of course, and recall the tall tales of rural Americana. In the novella Watch with Me, we are given a story of such depth, breadth, and importance it earns being listed as one of the most important short stories written in the American language during the twentieth century.
“Wendell Berry writes with a good husbandman’s care and economy . . . His stories are filled with gentle humor.” —The New York Times Book Review

“Berry is the master of earthy country living seen through the eyes of laconic farmers . . . He makes his stories shine with meaning and warmth.” —The Christian Science Monitor

“A small treasure of a book . . . part of a long line that descends from Chaucer to Katherine Mansfield to William Trevor.” —Chicago Tribune

Praise for Watch With Me

“Berry is the master of earthy county living seen through the eyes of laconic farmers... He makes his stories shine with meaning and warmth.” —Christian Science Monitor

“A small treasure of a book... part of a long line that descends from Chaucer to Katherine Mansfield to William Trevor.” —Chicago Tribune

“With the simplicity of folk tales, these stories beautifully evoke a world where people live in relatively harmony with nature, the land and community, and where neighborliness and human scale still matter.” —Publishers Weekly

“This charming collection examines the lives of Tol and Miss Minnie on their Kentucky farm from 1908 to 1941. Despite its universal appeal, this book is distinctly Southern, rich with delightful colloquialisms and the mores and attitudes of rural folk of that time. Some stories are framed... underscor[ing] the fact that storytelling and the past are integral to Southern society... Every reader deserves the opportunity to meet Tol and Miss Minnie.” —Library Journal

“These seven stories relate incidents in the life of a very good man, Ptolemy—‘Tol’—Proudfoot, towering final scion of a line of Kentucky farmers loved for their gentleness, intelligence, and gregariousness and their sense of and love for their place and work in the world... Their diction is as chaste as a Bible story's; they express a biblical reverence for life and community, yet they're funny, too, and so beautiful.” —Booklist

“The local nature of their canny, comic tonalities, the old–timey subtitle, and the fact that all the action takes place before 1942 might lead browsers to take these Berry stories as merely quaint. That would be a mistake. In fact, like Isaac Bashevis Singer, Berry has been expanding by contraction, husbanding by close focus—in Berry's case, on the familiar demesne of Port William, Ky... The long title story, which closes the collection, is a masterpiece... The tale clarifies Berry's direction, as he moves way beyond nostalgia toward an immersion in other lives that expresses itself as a sense of intimate apartness—a willingness to follow his characters, but not necessarily to change them. Poetry nestled inside prose: startlingly and classically moving.” —Kirkus Reviews
Don't miss news & events from Counterpoint Press.
Subscribe to the newsletter today.