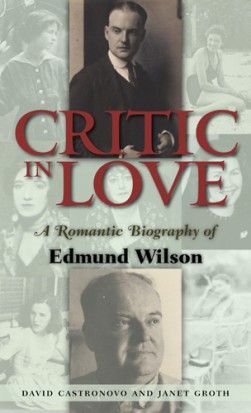 A Romantic Biography of Edmund Wilson

Edmund Wilson, 20th century America’s most direct and readable critic of literature and society, was a man of many loves. In his half century as a major force in American letters he had an outsize romantic career that reflected the complex depths of his personality. Each woman whom he came to love was an alluring interpretative problem, an erotic and analytic challenge, a presence that fired his imagination. They came from the Greenwich Village of the 1920s, from his own upper middle class world of privilege, from New York’s working class, from the high reaches of literary New York as well as from the workaday world of Talcottville in upper New York State.

Who were they? Poet Edna St. Vincent Millay; actress Mary Blair; friends and drinking buddies Dorothy Parker, Louise Bogan, Dawn Powell, and Elinor Wylie; poet Leonie Adams; writer and intellectual Mary McCarthy; Mamaine Paget, later the wife of Arthur Koestler; and screenwriter and journalist Penelope Gilliatt were the best known. They appear here as personalities in their own right as well as in the roles they play in Wilson’s biography. His Rabelaisian appetites, ardors and vulnerabilities, and conceptions of love and sex are a story in themselves.

David Castronovo is the author of nine books, including Edmund Wilson, a New York Times Notable Book and Critic in Love: A Romantic Biography of Edmund Wilson. He was a professor of English at Pace University.