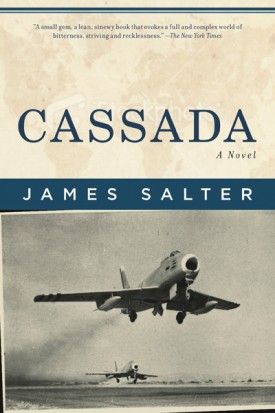 The lives of officers in an Air Force squadron in occupied Europe encompass the contradictions of military experience and the men’s response to a young newcomer, bright and ambitious, whose fate is to be an emblem of their own. In Cassada, Salter captures the strange comradeship of loneliness, trust, and alienation among military men ready to sacrifice all in the name of duty and pride.

After futile attempts at ordinary revision, Salter elected to begin with a blank page, to compose an entirely new novel based upon the characters and events of his second long unavailable novel, The Arm of Flesh. The result, Cassada, is a masterpiece.