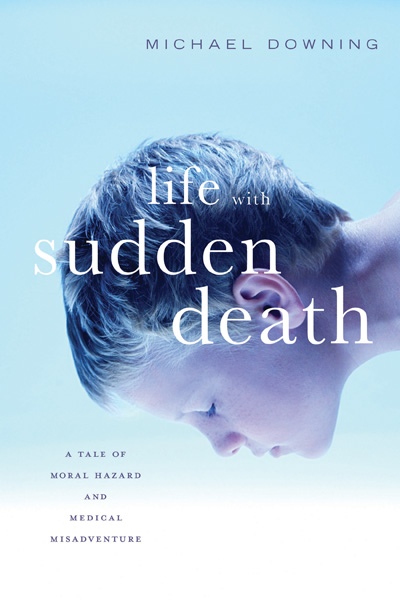 A Tale of Moral Hazard and Medical Misadventure

The youngest of nine children, Michael Downing was three when his father died — suddenly and inexplicably. No autopsy was performed. The family diagnosis was God’s will.

As a boy, Downing rigorously trained as a spiritual athlete, preparing to vault into heaven. But eventually he escaped the religious dogma, and the family arena — until one of his brothers died in 2003, suddenly and inexplicably. No autopsy was performed.

Alarmed, Downing pursued a diagnosis: Drawn into a world of researchers, clinicians, and manufacturers with their own arcane ethics and faith, Downing discovered he had inherited a mutant protein from his father, and the first symptom would be his sudden death.

To save his life, a defibrillator was hard–wired to his heart. Within weeks, he needed emergency surgery to remove the device and the life–threatening infection he got with it. Two months later, he was re–implanted — only to read in his morning newspaper that the new wires anchored to his heart were prone to failure. His device might be powerless, or it might deliver a series of unwarranted, possibly fatal, shocks.

From a bedeviled boyhood in the Berkshires to a grim comedy of errors in one of Boston’s best hospitals, Life with Sudden Death is a wild ride.