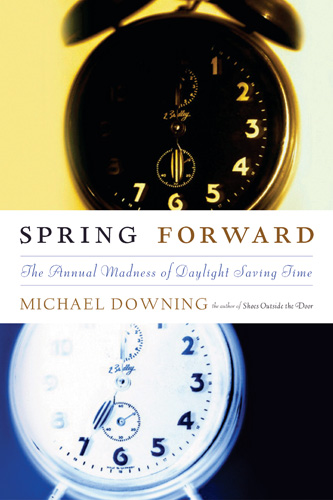 Michael Downing is obsessed with Daylight Saving, the loopy idea that became the most persistent political controversy in American history. Almost one hundred years after Congressmen and lawmakers in every state first debated, ridiculed, and then passionately embraced the possibility of saving an hour of daylight, no one can say for sure why we are required by law to change our clocks twice a year. Who first proposed the scheme? The most authoritative sources agree it was a Pittsburgh industrialist, Woodrow Wilson, a man on a horse in London, a Manhattan socialite, Benjamin Franklin, one of the Caesars, or the anonymous makers of ancient Chinese and Japanese water clocks.

Spring Forward is a portrait of public policy in the 20th century, a perennially boiling cauldron of unsubstantiated science, profiteering masked as piety, and mysteriously shifting time–zone boundaries. It is a true–to–life social comedy with Congress in the leading role, surrounded by a supporting cast of opportunistic ministers, movie moguls, stockbrokers, labor leaders, sports fanatics, and railroad execs.

“While the history is awash in tedious legislative minutiae, Downing brings it to life by dramatizing politicians and various industries pitted against one another in absurd, often hilarious debates. It's a colorful story of something we all take to be fundamental, but through history has been maddening, divisive and baffling.”—Publishers Weekly

“Novelist Downing writes gracefully, with a penchant for the strange detail, and he draws much mirth from the facts about [daylight savings time] and its amorphous benefits.”—Booklist
Don't miss news & events from Counterpoint Press.
Subscribe to the newsletter today.