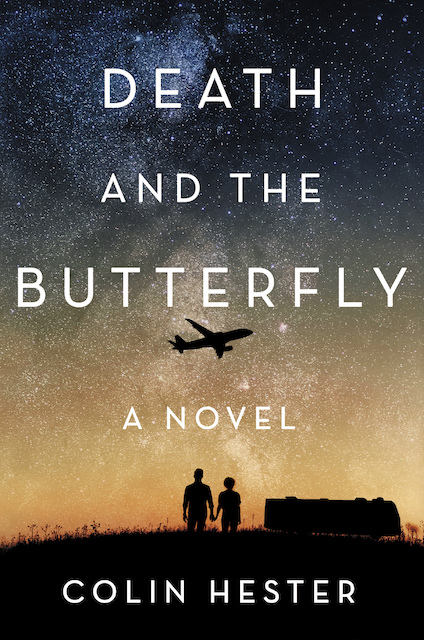 Death and the Butterfly

For readers of Michael Ondaatje and Chris Cleave, this sweeping multigenerational novel centered around endless heartbreak and enduring love features the intertwined stories of three women who transcend three tragedies of the twentieth century with the aid of the greatest love poet of all time: Pablo Neruda.

Toronto, Canada, the early 1980s. As a young couple struggles to survive the Reagan recession, the husband, Alexander Polo, is forced to take a job as a paperboy. When the wife, Julie, discovers she is pregnant, Polo must now confront his future head–on with his heart open.

>Montana, the first days of September 2001. His wedding day overshadowed by the tragedy of 9/11, Jack Riordan discovers a magazine story written by Polo about Susan and airplanes and her love of the poems of Pablo Neruda.

With humor and insight, Colin Hester explores how Susan, Polo, and Jack carry on—grieving the death of a child or the end of a marriage—in deeply felt and beautifully imagined prose.

"Hester writes with a grace that uplifts . . . This gift to readers shows how beauty and death can coexist."—Publishers Weekly

"Hester takes us to a wide variety of settings, from London in the blitz to Toronto, Vancouver, California, and the northern plains of the United States. Each location is described in depth, each finely observed detail outlined with the clarity of the poet." —Valerie Adolph, Historical Novel Society

“Death and the Butterfly is a marvel, a magic trick, both a ballet on the tightwire of human strength and frailty and a fall into the darkest and deepest well. Colin Hester’s achingly poignant sentences—this is an artist at the top of his power—balanced me breathlessly and held my hand as I fell. What his characters find in these most dark and private places—what we find—is one another. This is a story about Nazi bombs and grief–dumb road trips, of dying lovers and children. About senselessness, and sense. A story of how, paradoxically, our own most private grief is what connects us to everyone. It’s a novel about poetry, too, and how common beauty and loss just might help us love, and love the world, again.” —David Allan Cates, author of Tom Connor's Gift

“A wonderful read . . . A true house of cards in which you fall, like Alice, through scene after scene. It’s a fall from grace through horror into a grace more simple. And after the house of cards tumbles we are left alone, awake and alive.” —William Kittredge, author of The Willow Field

“Like a dream that leaves you trembling for hours, Diamond Sutra is by turns frightening, sexy, edgy, fantastic, and at its center deeply courageous and true. Colin Hester tells a story like a magician and writes like he’s lit from within.” —Pam Houston, author of Deep Creek

“A knowing ride through the rough country of a young man's broken heart.” —i>Publishers Weekly