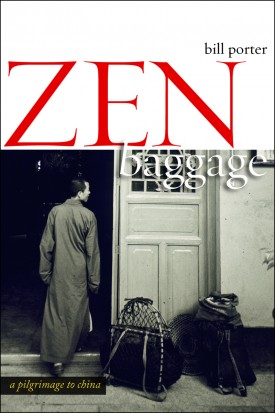 A Pilgrimage to China

In the spring of 2006, Bill Porter traveled through the heart of China, from Beijing to Hong Kong, on a pilgrimage to sites associated with the first six patriarchs of Zen. Zen Baggage is an account of that journey. He weaves together historical background, interviews with Zen masters, and translations of the earliest known records of Zen, along with personal vignettes. Porter’s account captures the transformations taking place at religious centers in China but also the abiding legacy they have somehow managed to preserve. Porter brings wisdom and humor to every situation, whether visiting ancient caves containing the most complete collection of Buddhist texts ever uncovered, enduring a six–hour Buddhist ceremony, searching in vain for the ghost in his room, waking up the monk in charge of martial arts at Shaolin Temple, or meeting the abbess of China’s first Zen nunnery. Porter’s previously published Road to Heaven: Encounters with Chinese Hermits has become recommended reading at Zen centers and universities throughout America and even in China (in its Chinese translation), and Zen Baggage is sure to follow suit.

Red Pine was born in Los Angeles in 1943 and attended graduate school at Columbia University. An acclaimed translator, his published works include four major Buddhist texts: The Lankavatara Sutra, The Platform Sutra, The Diamond Sutra, and The Heart Sutra. He is also the author of Zen Baggage and Road to Heaven: Encounters with Chinese Hermits. He has lived in Taiwan and Hong Kong and has traveled extensively in China, visiting Zen temples and seeking out hermits. He now lives in Port Townsend, Washington.

Praise
Winner of the 2018 Thornton Wilder Prize for Translation

"Porter takes the reader to places far off the tourist track and far from the economic and political frenzy of major cities, traveling on buses and sleeping rough in monasteries. He does it without pedantry or zeal and with some humor." —Library Journal