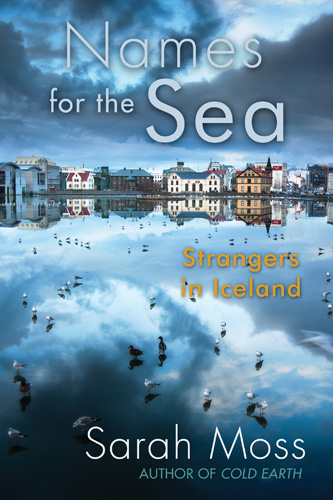 Names for the Sea

A memoir of a family’s year living in Reykjavik that “captures the fierce beauty of the Arctic landscape” (Booklist).

Sarah Moss had a childhood dream of moving to Iceland, sustained by a wild summer there when she was nineteen. In 2009, she saw an advertisement for a job at the University of Iceland and applied on a whim, despite having two young children and a comfortable life in Kent, England.

The resulting adventure was shaped by Iceland’s economic collapse, which halved the value of her salary; by the eruption of the volcano Eyjafjallajokull; and by a collection of new friends, including a poet who saw the only bombs fall on Iceland in 1943; a woman who speaks to elves; and a chef who guided Sarah’s family around the intricacies of Icelandic cuisine.

Moss explored hillsides of boiling mud and volcanic craters and learned to drive like an Icelander on the unsurfaced roads that link remote farms and fishing villages in the far north. She watched the northern lights and the comings and goings of migratory birds, and as the weeks and months went by, she and her family learned new ways to live. Names for the Sea is her compelling and very funny account of living in a country poised on the edge of Europe, where modernization clashes with living folklore.

“Beautifully written . . . A stranger in a strange land, Moss grapples with new foods, customs and landscapes that are both oddly familiar and wildly alien in this absorbing memoir.” —Financial Times

Sarah Moss is a novelist, travel writer and academic. She teaches Creative Writing in the English Department at University College Dublin and is a Fellow of the Royal Society of Literature. Moss has written seven novels, Ghost Wall, The Tidal Zone, Signs for Lost Children, Bodies of Light, Night Waking, and Cold Earth. Ghost Wall was shortlisted for the RSL Ondaatje Prize and the Polari Prize, and longlisted for the Women’s Prize, and The Tidal Zone, Signs for Lost Children, and Bodies of Light were shortlisted for the Wellcome Book Prize, in 2017, 2016 and 2015 respectively.

Praise for Names for the Sea

"An infectious memoir from someone engagingly candid about her temporary homeland's limitations—and her own." —Kirkus

"Moss . . . captures the fierce beauty of the Arctic landscape, the hardships of establishing family life as foreigners on a local salary in a nation suffering an economic collapse, and most interestingly, the paradoxes of the national character." —Booklist
Don't miss news & events from Counterpoint Press.
Subscribe to the newsletter today.