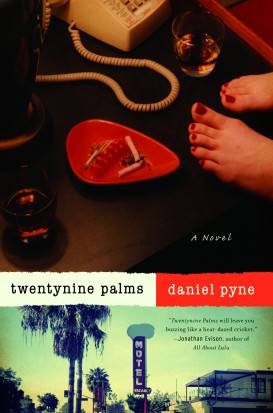 Cracking in the desert heat, the sleepy town of Twentynine Palms sits outside the bright blankness that is the sprawl of Los Angeles. For someone on the run like Jack Baylor, who needs a quick exit out of L.A. after a steamy affair with his best friend’s wife, Twentynine Palms is the perfect refuge.

Standing on the balcony of room 203 at Rancho del Dorotea, Jack plans to lay low for a few days, relax, and enjoy the high desert and the pool. But Jack’s best friend, Tory, is already following his trail up Highway 61, and he wants nothing but revenge.

Before Jack has a chance to plan his next move, a family disappears from the motel, leaving behind the signs of a gruesome struggle. In the eyes of the Twentynine Palms police, Jack is the only logical suspect. Now Jack has to clear his name and escape his angry best friend. With the unexpected help of a 14–year–old girl, Jack desperately works to evade the police and Tory before his world comes entirely unhinged.

With feverish Southern California as the backdrop, Twentynine Palms is a sun–soaked, skittering race toward a surprising truth.

Daniel Pyne, a visiting professor at the UCLA Graduate School of Film and a writing advisor for the Sundance Institute, is the author of the novel Twentynine Palms. Pyne wrote the acclaimed scripts for The Manchurian Candidate, Pacific Heights, and Fracture, among others. He lives in Los Angeles.

"Character is key in this deliciously edgy thriller, screenwriter Pyne's (The Manchurian Candidate) first novel. A snapshot: Two 14–year–olds in Santa Barbara, Calif. Jack Baylor, a total innocent, is desperate for the approval of menacing Tory Geller. Somehow, he gets it. Six years later, they're surfing together. When a kid grabs his wave, Tory goes ballistic, beating him to a pulp but also (accidentally) blinding Jack in one eye. Fast–forward 15 years. Jack, Los Angeles actor and inveterate bed–hopper, has just had sex with Hannah, Tory's trust–fund wife, ended their affair and is relaxing at a Mojave Desert motel. Let the games begin. A beautiful woman called Mona walks into the bar. Jack figures her for his next conquest. They're not alone. There's a runaway teen (Rachel); some Marines; and three middle–aged women consoling themselves with margaritas. None of them are wallpaper; all will be used in important ways, evidence of the author's sweet economy. Back to Jack, for this is his story. He has bedded Mona, even been moved by her vulnerability, until he learns she has two kids. Time to run. He sneaks away caddishly; soon after, Tory happens upon Mona and the kids outside Jack's room. Jack, on a back road, is ambushed by an army of cops. Mona and the kids are missing, presumed dead, and Jack's motel room is drenched in blood. It would be wrong to reveal much more, but the surprises come fast and furious: They include Jack's breakout from jail, his unwanted company (Rachel again) and their trip to a border town. Over them looms the avenging shadow of Tory, armed and dangerous. What went down in Room 203? That's part of the suspense, but the biggest part is waiting to see if Jack, with Rachel as his improbable mentor, will finally become a stand–up guy, taking responsibility for his actions, running no more. With dialogue that sings and action that sizzles, this is a prime candidate for the big screen." —Kirkus (starred)

"Marginal Hollywood actor Jack Baylor ends an affair with the wife of his best friend, Tory, and knowing Tory's anger–management issues, he retreats to the California desert town of Twentynine Palms to let the metaphorical dust settle. There he promptly begins an affair with Mona, a young mother of two. But Tory arrives in the town bent on revenge, Mona and her kids disappear, and Jack's motel room is awash with blood. Jack is promptly arrested and must escape to clear himself. Character is everything in this desert–noir debut, and Jack is the embodiment of fecklessness; without a script, he's simply lost. Rachel, a clever 14–year–old runaway, saves him repeatedly. In the book's best scene, Jack returns to Hollywood, still on the run, for a bit part in a major film. Pyne, who is a successful screenwriter, limns a wonderfully plausible look at a showbiz–sound–stage moment: a clash between a loony director who speaks only quasi–mystical gibberish and an idiot box–office titan channeling De Niro. Twentynine Palms is great fun." —Booklist

"Loss and redemption in the high desert, with enough colorful characters and twists of plot to keep the reader turning pages. Twentynine Palms is classic Californian noir." —Kem Nunn, author of Tapping the Source and Tijuana Straits

"Daniel Pyne's Twentynine Palms is a terrific novel, both a first–rate thriller with sweet and comic twists, and a moving love story. It's also got some of the best poetic and moody writing about L.A. and the desert community I've read in a long time. A one–sit read, which will leave you smiling." —Robert Ward, author of Four Kinds of Rain and Total Immunity

"Pyne sure–footedly blazes a fresh trail through Chandler country in this taut, expertly wrought desert noir. Twentynine Palms will leave you buzzing like a heat–dazed cricket." —Jonathan Evison, author of All About Lulu