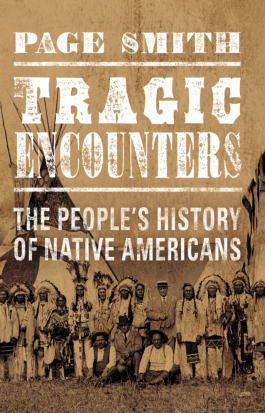 A People's History of Native Americans

Page Smith was one of America’s greatest historians. After studying with Samuel Eliot Morison at Harvard, Smith went on to a distinguished academic career that culminated with him being the founding Provost of Cowell College, the first college of the new campus of the University of California at Santa Cruz. But he made his mark with a history of the United States published in eight volumes, each volume carrying the subtitle “A People’s History of the United States. These were ground-braking histories, composed as a long continuous narrative loosely organized around the themes present in each age or period. There were sourced almost entirely in contemporaneous accounts of the events covered, and they set the ground for a whole new approach to history, that perhaps culminated in the work of Howard Zinn.

During the last years of his life, Smith concentrated on composing a history of Native Americans after the first European contact. This manuscript was discovered unpublished after his death. Using his wonderful technique of narrative, discovering in the events of each period the thematic overview of that period, he again turns to contemporaneous documents to provide the structure and substance of his story. From Jamestown to Wounded Knee, the story of these Native peoples from coast to coast is explored, granting these oppressed and nearly destroyed people a chance to tell their own broad story. We know of no other similar attempt, and this book will surely caution and intrigue readers as they are offered a new slant on a very old subject.
About Page Smith

Charles Page Smith (best known by his middle name, ) was a United States historian, author, professor and community activist. A veteran of World War II, he was awarded a Purple Heart for his service. He was the author of over twenty books, including the eight-volume A People's History of the United States (the title of which served as inspiration for Howard Zinn) and John Adams, which was awarded the Bancroft Prize in 1963 and was a finalist for the National Book Award. As a professor, he taught at UCLA and later was the founding provost of Cowell College at the University of California, Santa Cruz. As an activist, he was a lifelong advocate for the homeless, community organization and improving the prison system. Page Smith died in August 1995, one day after the death of his beloved wife, Eloise.