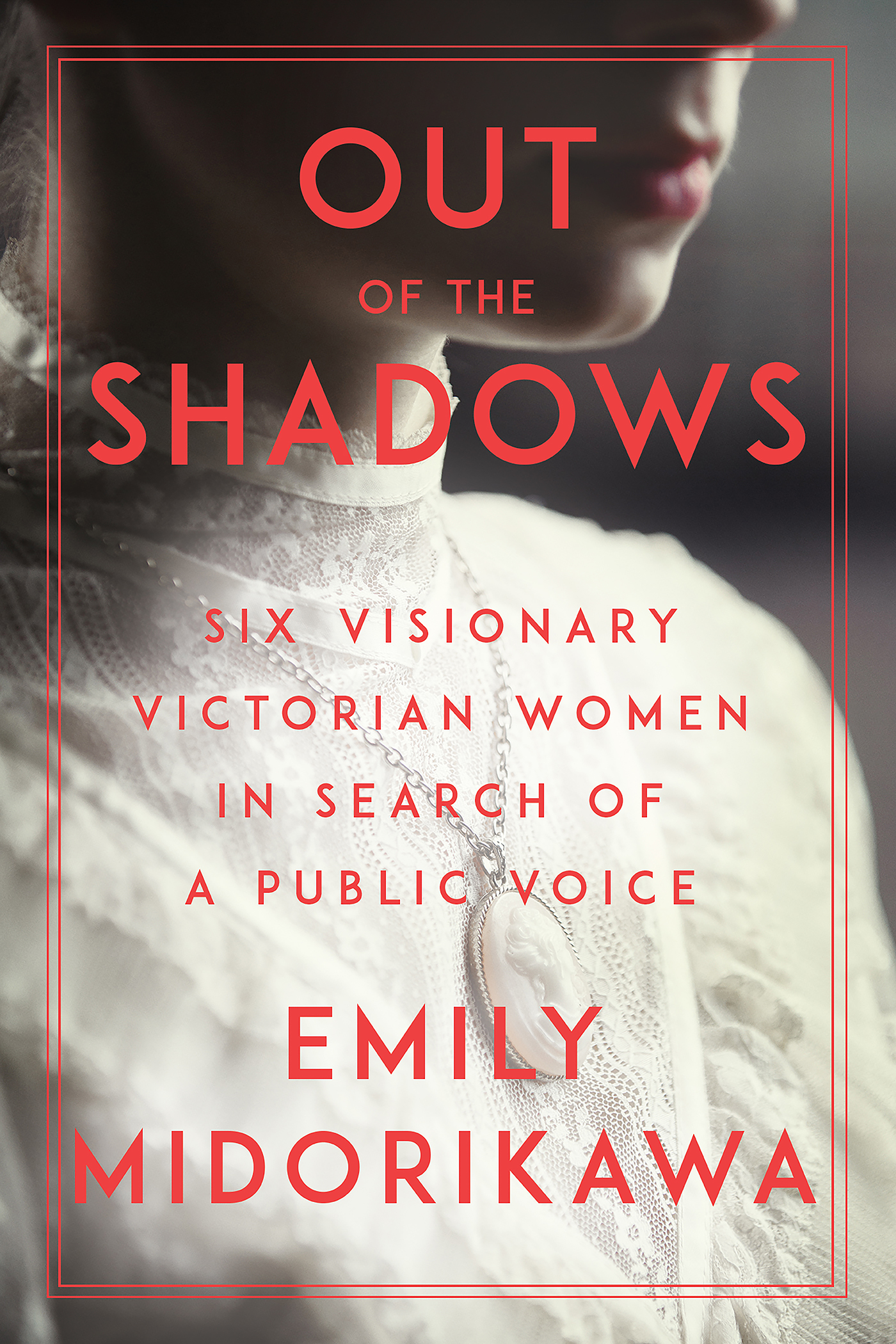 Queen Victoria’s reign was an era of breathtaking social change, but it did little to create a platform for women to express themselves. But not so within the social sphere of the séance—a mysterious, lamp-lit world on both sides of the Atlantic, in which women who craved a public voice could hold their own.

Out of the Shadows tells the stories of the enterprising women whose supposedly clairvoyant gifts granted them fame, fortune, and most important, influence as they crossed rigid boundaries of gender and class as easily as they passed between the realms of the living and the dead.

The Fox sisters inspired some of the era’s best-known political activists and set off a transatlantic séance craze. While in the throes of a trance, Emma Hardinge Britten delivered powerful speeches to crowds of thousands. Victoria Woodhull claimed guidance from the spirit world as she took on the millionaires of Wall Street before becoming America’s first female presidential candidate. And Georgina Weldon narrowly escaped the asylum before becoming a celebrity campaigner against archaic lunacy laws.

Drawing on diaries, letters, and rarely seen memoirs and texts, Emily Midorikawa illuminates a radical history of female influence that has been confined to the dark until now.

Emily Midorikawa is the coauthor of A Secret Sisterhood: The Literary Friendships of Jane Austen, Charlotte Brontë, George Eliot, and Virginia Woolf. Her work has been published in The Washington Post, The Paris Review, Lapham’s Quarterly, Time, and elsewhere. She is a winner of the Lucy Cavendish Fiction Prize and was a runner-up for the SI Leeds Literary Prize and the Yeovil Literary Prize. She teaches at New York University London.

"This is the great strength of Out of the Shadows; it offers up a tapestry of complex characters with conflicted motivations, woven together with the color of ghostly apparitions (and angry mobs) . . . Out of the Shadows pivots between the women’s extraordinary savvy, intelligence and performance and the frequently unethical and exploitative means they adopted to achieve their ends." —Brandy Schillace, The Wall Street Journal

"Enthralling . . . Midorikawa has assembled and analyzed an impressive range and variety of sources in building her biographies, but also in delineating the social, scientific and political changes that formed their backdrop . . . [A] thrilling read, striking inter alia for the nonchalance with which these female Victorian visionaries took on the rigours of transatlantic travel, and for the incidental intertwining of their remarkable lives." —Jane Haile, The New York Journal of Books

"In Out of the Shadows: Six Visionary Victorian Women in Search of a Public Voice, Emily Midorikawa unveils the triumphant, tragic and deeply unconventional lives of six of the Victorian era’s best known spirit mediums. Midorikawa roots her story in both the history of spiritualism and the powerlessness of Victorian women like the Fox sisters—Leah, Maggie and Kate—who were left to grasp for influence in seemingly manipulative ways . . . Midorikawa breathes life into these long-ago women in ways that make them feel contemporary despite their extraordinary circumstances and distance in time . . . By the book’s end, it no longer matters whether you believe these six remarkable spirit mediums were hoaxes or not; you’ll certainly believe in them. —BookPage (starred review)

"Entertaining and informative . . . Midorikawa doesn’t stint on the drama, detailing money troubles, sisterly discord, poor marital choices, and fraud accusations as she builds a persuasive case for the Spiritualist movement’s considerable influence on 'the journey toward female empowerment.' Women’s history buffs will be enthralled." ––Publishers Weekly

"This enjoyable group biography presents Maggie and Kate, along with Leah Fox (their sister), Emma Hardinge Britten, Victoria Woodhull, and Georgina Weldon, as examples of Spiritualism’s role in first-wave feminism . . . Brisk and entertaining, this biography should draw the attention of readers interested in the social effects of the Spiritualist movement, or in 19th-century women’s history." —Library Journal

"[Emily] Midorikawa (A Secret Sisterhood, 2017) presents the stories of six female spiritualists and the incredible impact that they had on society and politics . . . The author does an excellent job of characterizing the social milieu and constraints that these women were subject to . . . This well-researched book offers insight into a unique niche of women’s history, and would be a worthy addition to most libraries. —Booklist

"If you've been bored or frustrated by superficial groupings of women described as 'badass,' 'daring,' or 'fearless,' only to discover the text is basically linked Wikipedia articles, congratulations, you found what you were looking for all along: An actual scholar who quotes salacious diary entries and intimate letters alongside essential context and cutting analysis. I'm now an Emily Midorikawa completist, and I'm quite certain you'll soon be, too." —Alexis Coe, New York Times bestselling author of You Never Forget Your First: A Biography of George Washington

"Astonishing, gripping, and almost eerily timely. Midorikawa’s tender, elegant prose is a joy to read and her fascination with her subjects irresistible." —Julie Myerson, author of The Stopped Heart

"This book is a treasure--a little known history about forgotten movers and shakers, women who influenced our country in unimaginable, and unseen (to say the least) ways. Reader: you need this book! Take it home with you and learn about a potent part of our history that you didn't know you needed to know. Written with seamless clarity, Midorikawa has produced another true gem. I LOVE THIS BOOK." --Mira Ptacin, author of The In-Betweens: The Spiritualists, Mediums, and Legends of Camp Etna

"Public speaking was a disreputable occupation for Victorian-era women--unless they were communicating with the dead, a skill that turned out to be much in demand and often quite lucrative. Emily Midorikawa's account of six women who were adept at working psychic miracles offers a fascinating new view of fame, belief, and feminism." --Laura Shapiro, author of What She Ate: Six Remarkable Women and the Food that Tells Their Stories
Don't miss news & events from Counterpoint Press.
Subscribe to the newsletter today.