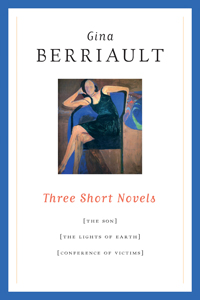 The Son, The Lights of Earth, and The Conference of Victims

Gina Berriault’s work as a storywriter of great psychological empathy and extraordinary elegance and subtlety was celebrated widely at the end of her life. Her collection Women in Their Beds, won the PEN/Faulkner Award for fiction, the National Books Critics Prize in fiction and the Rea Prize for lifetime achievement. She has few equals in the history of the American short story. Over the course of her career she also wrote several novels and novellas, and we have here a collection of the three finest, which have each been published before as separate volumes but which have been out of print and unavailable for many years. They each can be counted among her finest work.

The Son was first published in 1962, The Conference of Victims in 1966. And The Lights of Earth, first published in 1984, stands easily alongside her greatest achievements. All three are stories about women. In The Son, Vivian believes men run the world and finds meaning only in erotic love. As she envies her son’s future, and wishing to share it, she seduces him. Naomi, in Conference of Victims, is thrown nearly out of her mind by her brother’s suicide. Only her need to love keeps her alive. When it was first published, Andre Dubus said of The Lights of Earth, “Like her stories, it’s masterly. Its central character is a woman, Ilona Lewis, who confronts loss of earthly love. But Ilona’s experience is far more complex than losing a man because he has become a celebrity. It involves the hearts of all of us seeking the lights of earth, the soul’s blessing in its long, dark night.”

Praise
"Fans will rejoice to return to the rich, surging music of Berriault's voice, and first–timers are in for a stunning initiation. Shapely, unflinching, jewel–clear, her tales unfold without a wasted syllable – in some of the most beautiful sentences you will ever read." —San Francisco Chronicle

"Whether focusing on yuppies or drifters, social workers or Indian restaurateurs, heroin addicts or teenage baby–sitters, Berriault writes with great psychological acuity and a compassion that comes always from observation, never from sentimentality. Each story is constructed so gracefully that it's easy to overlook how carefully crafted Berriault's writing is. Her lilting, musical prose adds a sophisticated sheen to the truths she mines." —Publishers Weekly

"Though her language is plain, the complexity of her knowing leads one into mysteries deeper than tears. To discover Berriault is to voyage into uncharted amazements." —Jury for the 1997 Rea Award for the Short Story

"Each of Gina Berriault's stories contains a world, beautifully illumined by the light of the life within it. Her writing, line for line, is the most emotionally precise I know and her stories are among the wisest and most heartbreaking in American fiction." —Robert Stone

"Berriault writes real fiction . . . She deepens reality, complements it and affords us the bliss of knowing, for a moment, what we cannot know." —The Nation

"The writing is sensuous and the texture closely woven, in colors that, though muted, form a memorable design." —The New York Times