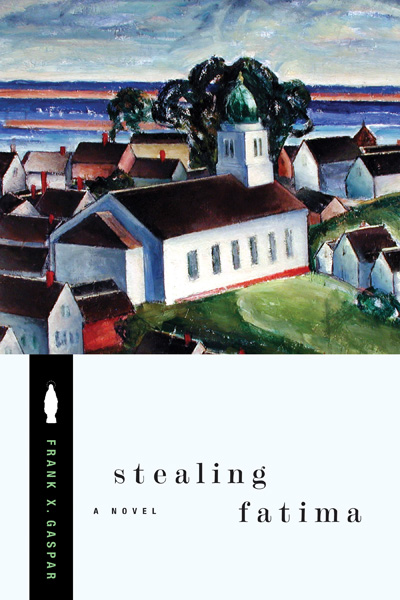 As the last light of All–Hallows’ Eve falls on a small town at the tip of Cape Cod, Father Manuel Furtado begins his nightly ritual of gin and pills, prayer, and hours spent writing feverishly in his ledger. With the deep luxury of the chemicals in his body, he copies passages from Saint Augustine and Martin Heidegger, disciplined in his desire to flesh out his ever–building demons.

But, unlike his usual uninterrupted reflection, this night there is a crash, sudden enough to pull Father Manny from the rectory and toward his church, Our Lady of Fatima. He finds a man there — his childhood friend Sarafino, whom he has not seen in decades — frail with illness and desperate to tell the priest about his recurring visits from the Virgin Mary. Despite Father Manny’s grave doubts about Sarafino and his visions, he lets his old friend into his home and his life, and this single act ignites a series of events that challenge the faith of this fishing village, the parish, and of Father Manny himself.

Striking and lovingly detailed, Stealing Fatima is the story of a priest’s search for redemption in a town where, even in these modern times, the divine is possible.

Frank X. Gaspar was born and raised in Provincetown, Massachusetts, of Azorean Descent (Pico, Sao Miguel). His ancestors were traditionally whalers and Grand Banks fisherman, sailing out of the Islands and then Provincetown. He is the author of five collections of poetry and two novels. Among his many awards are multiple inclusions in Best American Poetry, four Pushcart Prizes, a National Endowment for the Arts Fellowship in Literature, and a California Arts Council Fellowship in poetry. His debut novel, Leaving Pico, was a Barnes and Noble Discovery Prize winner, a recipient of the California Book Award for First Fiction, and a New York Times Notable Book. His second novel, Stealing Fatima, was a MassBook of the Year in Fiction (Massachusetts Foundation for the Book). His latest book, a fusion of genres, is The Poems of Renata Ferreira.

"A wounded healer navigates the uneasy intersections of faith, doubt, and action in this quietly brilliant novel about the mysteries of belief. Tormented by scandal and various addictions, Father Manuel Furtado struggles to heal himself and care for his church, Our Lady of Fatima. With the help of both blood and fictive kin, Furtado is able to put aside his personal demons and minister to the closely knit community to which he's been assigned. The return of a presumed–dead childhood friend, however, leads to a series of events that plunge Furtado, and the town, deeper into its long, dark night of the soul. Will the recovery of a long–lost statue bring grace and healing? Or is the past better left unburied? Readers who enjoy complex characterization will appreciate Father Furtado's complex psychological makeup and admire Gaspar's equally conflicted secondary characters. VERDICT Gaspar, an award–winning poet and novelist ("Leaving Pico"), triumphs again with his unflinching portrait of doubt and devotion, demonstrating with skill and grace how the two forces simultaneously torment and uplift Fatima's parishioners." —Library Journal

"Graham Greene would likely recognize the unhappy priest who emerges in the opening pages of this improbable novel: bereft of faith in church doctrine and sustained only by gin and fraudulently acquired painkillers, Manuel Furtado nightly explores the dark places in his own soul and in the lives of his hard– pressed congregation through wide–ranging meditations recorded in a personal ledger. But one night Furtado's dark ruminations are interrupted by the reappearance of Sarafino—a long–lost boyhood friend, now dying from AIDS and in flight from an armed–robbery warrant. The priest's life veers in directions even Greene could not have imagined. In a multilayered narrative rich in psychological insight, Gaspar follows his protagonist as he ministers to his distressed friend, so exposing unresolved conflicts in his own life. A number of these conflicts cluster around his involvement—decades earlier—in the impious theft of a sacred image of Our Lady of Fatima, an image embodying church teachings that Furtado cannot accept. Furtado's perplexities over these teachings grow particularly acute when Sarafino repeatedly claims personal visions of the Virgin. Readers will fully anticipate Sarafino's death. They will marvel, however, at where events surrounding that death finally take Furtado. A brilliant foray beyond the usual limits of fiction." —Booklist, starred review

"In his second novel, award–winning poet–novelist Gaspar (Leaving Pico) explores an unnamed Massachusetts burg (with a strong resemblance to Provincetown) through its Portuguese–speaking community, a collection of rich, emotionally stormy characters. Centered on Fr. Manuel Furtado, the story begins during Manny's nightly ritual of liquor, pills and prayer late on All–Hallows' Eve, when he finds his long–lost childhood friend, Sarafino Pomba, breaking into his church. Dying from AIDS and running from the law, Sarafino takes up residence in a spare room, intent on convincing Manny that he's been visited by the Virgin Mary. Other mysteries involve Manny's family, lesbian church secretary Mariah Grey and her partner, and a missing religious statue; meanwhile, fellow priest John Sweet investigates Manny's substance abuse problem, hoping to acquire his own parish. Gaspar's winding sentences keep the pace measured, but leave deep impressions regarding the fishing community and its inhabitants. (The author is especially affectionate toward Sarafino, 'So flimsy and brittle, like a dry leaf, with the wind raking the world outside.') Gaspar's masterful prose should absorb any reader intrigued by immigrant communities." —Publishers Weekly

"A troubled New England pastor wrestles with the mysteries of God and man.

Gaspar follows up his elegant debut novel (Leaving Pico, 1999) with an equally elegiac contemplation of transgression and redemption set in the same culturally rich Portuguese stew of Provincetown, Mass. Warring impulses between the search for truth and the keeping of secrets occupy the heavy heart of Father Manuel Furtado, a protective guardian of his flock who nonetheless damps down his religious anxiety with gin and pills every night. His character is represented well by Gaspar's lush, thoughtful prose: "It was not a matter of eternity for him, this salvation, but a matter of lifting the quotidian despairs and depressions, the wounds and griefs. And of pointing up the small happinesses. The generosities of spirit that bloomed ephemerally in the world. The sinful world, he might say, but what was sin but humanness? And anyway, he was not bereft of God. God was real and present in his life and everywhere else. Exactly how was a huge conundrum." Furtado's perilous intellectual position is threatened when a very old friend, Sarafino Pomba, appears suddenly in his church, Our Lady of Fatima. "You and me, Manny. What stuff we did," says the fugitive convict, nearly incoherent from illness. Caught in a race between AIDS and lung cancer, the dying Sarafino claims to have divine visions as a result of a long–ago indiscretion by the two friends: the theft of a statue of the Virgin Mary they believe lies buried still in the woods nearby. In tracing Furtado's tumultuous path from welcoming Pomba back into his life—an act of sublime faith for the wary believer—to recovering the long–missing icon, Gaspar crafts an eloquent, emotionally resonant story that marries the richness of his ethnic characters to the literary affections of writers like John Irving.

A modern–day folk tale that finds the divine spirit resting in the strangest places." —Kirkus

"The desire to resolve doubt . . . drives Gaspar's exquisite new novel . . . Gaspar's prose, with both its deliberation and moments of uncontainable joy, is like a soaring choral Mass . . . Skeptic and believer alike cannot help but be swept away by the beauty of the expression." —Boston Globe
Don't miss news & events from Counterpoint Press.
Subscribe to the newsletter today.