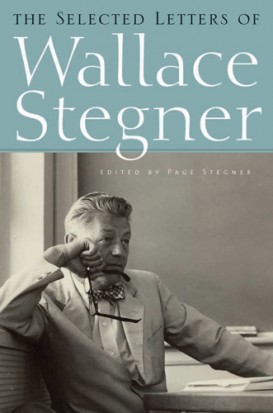 The Selected Letters of Wallace Stegner

Wallace Stegner, recipient of the Pulitzer Prize in 1972, was a great writer. As an author, historian, teacher, and environmentalist, he influenced countless prominent individuals during his long life. Showcasing some of those relationships, these letters (written between 1933 and 1993) cover a broad range of topics, including literature, history, conservation, and Stanford. Here are letters to colleagues, like Ansel Adams, friends and family, as well as many students who went on to become well–respected authors, among them Wendell Berry, John Daniel, Barry Lopez, William Kittredge, and Robert Stone.

In 1946 he founded the prestigious Stegner Fellowship Program. In 1961, his memos to then Secretary of the Interior Steward Udall set the tone and agenda for what would become the modern environmental movement. Here, in their entirety, are the letters that track it all. For a man who had no interest in writing an autobiography, they offer an inside look at his “unedited thoughts and opinions, and to a factual narrative untransformed by the literary imagination, to life lived before being lived,” writes his son Page Stegner in his introduction. Here is history as told through correspondence with people who helped shape literature, politics, and environmentalism in the twentieth century.

Wallace Stegner was born on February 18, 1909 in Lake Mills, Iowa. He was an American novelist, short story writer, environmentalist, and historian; he has been called The Dean of Western Writers. Stegner won a Pulitzer Prize for Angle of Repose, a novel about a wheelchair-bound man's recreation of his New England grandmother's experience in a late nineteenth-century frontier town. He also won the US National Book Award in 1977 for The Spectator Bird. Stegner grew up in Great Falls, Montana; Salt Lake City, Utah; and in the village of Eastend, Saskatchewan, which he wrote about in his autobiography Wolf Willow. Stegner taught at the University of Wisconsin and Harvard University. Eventually he settled at Stanford University, where he initiated the creative writing program. His students included Wendell Berry, and Sandra Day O'Connor. The Stegner Fellowship program at Stanford University is a two-year creative writing fellowship. The house Stegner lived in from age 7 to 12 in Eastend, Saskatchewan, Canada, was restored by the Eastend Arts Council in 1990 and established as a Residence for Artists; the Wallace Stegner Grant For The Arts offers a grant of $500 and free residency at the house for the month of October for published Canadian writers. Stegner died in Santa Fe, New Mexico, on April 13, 1993, from a car accident on March 28, 1993.

Stuart Page Stegner is the son of novelist Wallace Stegner. He was a novelist, essayist, and historian who wrote extensively about the American West.
Praise
"[F]rames the portrait of an engaged man, a man with a sense of humor, thoughtful and extremely vulnerable."