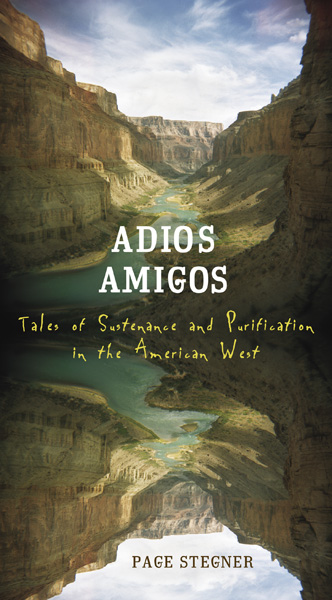 Tales of Sustenance and Purification in the American West

In this free–spirited collection of essays, Page Stegner weaves natural history, conservation polemic, ecology, and wilderness adventures on a number of the West’s major white–water rivers. Stegner moves effortlessly from his own experiences on the Colorado, Yampa, Green, San Juan, Dolores, and Missouri rivers to first explorations by historical figures such as Lewis and Clark and John Wesley Powell, to modern controversies that threaten the continued unspoiled isolation of these special places.

From its opening essay — recalling a hilarious, albeit hazardous, journey down the Owyhee River in southeastern Oregon — to the final episode on Lake Powell, Stegner’s narrative is rich in vivid detail, laced with sardonic humor, and always grounded in a passion for the West — both its past and the promise of its future.

Wallace Stegner was born on February 18, 1909 in Lake Mills, Iowa. He was an American novelist, short story writer, environmentalist, and historian; he has been called "The Dean of Western Writers". Stegner won a Pulitzer Prize for Angle of Repose, a novel about a wheelchair-bound man's recreation of his New England grandmother's experience in a late nineteenth-century frontier town. He also won the US National Book Award in 1977 for The Spectator Bird. Stegner grew up in Great Falls, Montana; Salt Lake City, Utah; and in the village of Eastend, Saskatchewan, which he wrote about in his autobiography Wolf Willow. Stegner taught at the University of Wisconsin and Harvard University. Eventually he settled at Stanford University, where he initiated the creative writing program. His students included Wendell Berry, and Sandra Day O'Connor. The Stegner Fellowship program at Stanford University is a two-year creative writing fellowship. The house Stegner lived in from age 7 to 12 in Eastend, Saskatchewan, Canada, was restored by the Eastend Arts Council in 1990 and established as a Residence for Artists; the Wallace Stegner Grant For The Arts offers a grant of $500 and free residency at the house for the month of October for published Canadian writers. Stegner died in Santa Fe, New Mexico, on April 13, 1993, from a car accident on March 28, 1993.

"Each blistering chronicle of a cathartically death–defying river journey in a heartbreakingly beautiful or bruised place is an occasion for brusque history lessons, self–deprecating hilarity, and flinty ruminations on our abuse of western lands . . . this rapids rider dispenses tonic straight talk and irreverent humor from the eco–front." —Booklist
Don't miss news & events from Counterpoint Press.
Subscribe to the newsletter today.