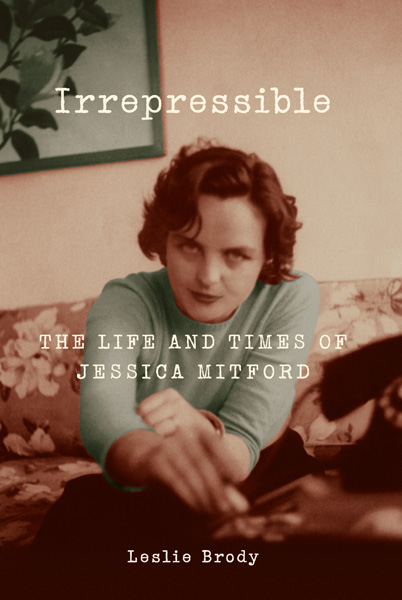 The Life and Times of Jessica Mitford

From the author of Red Star Sister

“An excellent biography. Brody has made the world a better place by telling [Mitford’s] saga so skillfully” (San Francisco Chronicle).

Admirers and detractors use the same words to describe Jessica Mitford: subversive, mischief–maker, muckraker. J.K. Rowling calls her her “most influential writer.” Those who knew her best simply called her Decca. Born into one of Britain’s most famous aristocratic families, she eloped with Winston Churchill’s nephew as a teenager. Their marriage severed ties with her privilege, a rupture exacerbated by the life she lead for seventy–eight years.

After arriving in the United States in 1939, Decca became one of the New Deal’s most notorious bureaucrats. For her the personal was political, especially as a civil rights activist and journalist. She coined the term frenemies, and as a member of the American Communist Party, she made several, though not among the Cold War witch hunters. When she left the Communist Party in 1958 after fifteen years, she promised to be subversive whenever the opportunity arose. True to her word, late in life she hit her stride as a writer, publishing nine books before her death in 1996.

Yoked to every important event for nearly all of the twentieth century, Decca not only was defined by the history she witnessed, but by bearing witness, helped to define that history.

“A valuable retelling of a provocative life.” —Kirkus Reviews

Leslie Brody has won the PEN Center USA West prize and a National Endowment for the Arts fellowship, and several awards for her playwriting. She is the author of the memoir Red Star Sister and is a professor at the University of Redlands. She lives in Redlands, California.

"Defying the odds, Leslie Brody has produced an excellent biography. Brody has made the world a better place by telling [Mitford's] saga so skillfully." —San Francisco Chronicle

"With passion, commitment, and a keen sense of adventure—the same qualities that defined her famous subject—Leslie Brody presents Jessica ‘Decca' Mitford as the delightfully complicated character she was: aristocrat, Communist, civil rights activist, mother, author, American dreamer. In brisk but sympathetic prose that will resonate even with those totally unfamiliar with Mitford, Brody traces the fascinating evolution of a woman whose life was shaped by the great political forces of her time, yet who always stayed true to herself and her personal vision. Irrepressible is a great, all–encompassing narrative in the age of niche." —Erin Aubry Kaplan, author of I, The People

"Such a refreshing biography of Decca! What an inspiration Leslie Brody's calm yet always vivid history should be to young rebellious souls oppressed by the gloomy cul–de–sac into which our national politics have drifted. Here's the story of a true rebel in the finest traditions of upper–class English women who kicked over the traces. Decca's journey took her from Republican Spain to Oakland, California. Brody is never better than when describing the energy and idealism of Communists in those vicious postwar years and Decca's humor and enormous bravery in the face of real physical danger." —Alexander Cockburn
Don't miss news & events from Counterpoint Press.
Subscribe to the newsletter today.