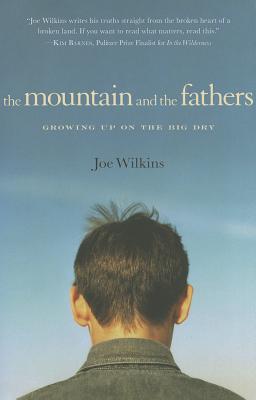 The Mountain and the Fathers

Growing Up in the Big Dry

The Mountain and the Fathers explores the life of boys and men in the unforgiving, harsh world north of the Bull Mountains of eastern Montana in a drought afflicted area called the Big Dry, a land that chews up old and young alike. Joe Wilkins was born into this world, raised by a young mother and elderly grandfather following the untimely death of his father. That early loss stretches out across the Big Dry, and Wilkins uses his own story and those of the young boys and men growing up around him to examine the violence, confusion, and rural poverty found in this distinctly American landscape. Ultimately, these lives put forth a new examination of myth and manhood in the American West and cast a journalistic eye on how young men seek to transcend their surroundings in the search for a better life. Rather than dwell on grief or ruin, Wilkins’ memoir posits that it is our stories that sustain us, and The Mountain and the Fathers, much like the work of Norman Maclean or Jim Harrison, heralds the arrival of an instant literary classic.

Joe Wilkins lives now with his wife and two young children on the north Iowa prairie, where he teaches writing at Waldorf College. His poems, essays, and stories have appeared in The Georgia Review, The Southern Review, The Missouri Review, Harvard Review, Mid-American Review, Beloit Poetry Journal, The Sun, Orion, and Slate. His work has won numerous awards and honors, and he is the winner of the Richard J. Margolis Award of Blue Mountain Center, which goes to a promising new journalist or essayist whose work combines warmth, humor, wisdom, and concern with social justice.

Praise
Praise for The Mountain and the Fathers

"Joe Wilkins writes his truths straight from the broken heart of a broken land. When I read his personal stories, so lyrically and wondrously imagined, I feel a beautiful and sometimes terrifying emotion rise up in me—mythic, redemptive, and sustaining. If you want to read what matters, read this." —Kim Barnes, author of In the Wilderness: Coming of Age in Unknown Country

"Joe Wilkins' sketches of life in Montana's Big Dry country, north of Billings and halfway to nowhere, are filled with a potent combination of loving poetry and bitter nostalgia. You can smell the sage and wild onions and feel how this land apart forms and twists those who live there, and sometimes kills them. Wilkins' search for his father—and for himself—takes its own twist: the Big Dry may care nothing for pilgrims and father seekers, but it marks its own as surely as a father marks a son." —John N. Maclean

"Joe Wilkins grew up on the enormous plains of eastern Montana. He found plenty to respect and revere and plenty to escape. And he learned the stories and how to tell them. The Mountain and the Fathers is vivid and compelling. We're reading it in Montana in order to understand ourselves. And for the pure pleasure we find in the storytelling." —William Kittredge

"Joe Wilkins grew up hard in the middle of nowhere—the bent–back, make–do world of the driest, loneliest country in all Montana—and after reading this memoir about the West, about myth, about manhood, about grief and transcendence, I felt at once heartbroken and hopeful and ultimately awed by his ability to twist sentences like barbed wire, his voice wondrously rich with dirt–and–gravel poetry." —Benjamin Percy, author of The Wilding

"Wilkins—who writes out of the James Wright and Richard Hugo tradition—has a voice all his own. Each sentence is a hand–built and beautiful thing. . .The words at time feel old and weary. Sometimes they feel expansive like Montana's plains. Sometimes they suffocate the reader under the weight of expectations. Other times they are so dry and barren that they nearly blow off the page. But they are always poetic, and they always sing in a voice that so few writers possess." —Brevity

"Page after page and sentence after sentence, this is one of the best–written and most readable books to come across this reader's desk, worthy of keeping company with such excellent nonfiction such as A River Runs Through It, Blue Highways, and Tom Montag's Curlew." —Briar Cliff Review