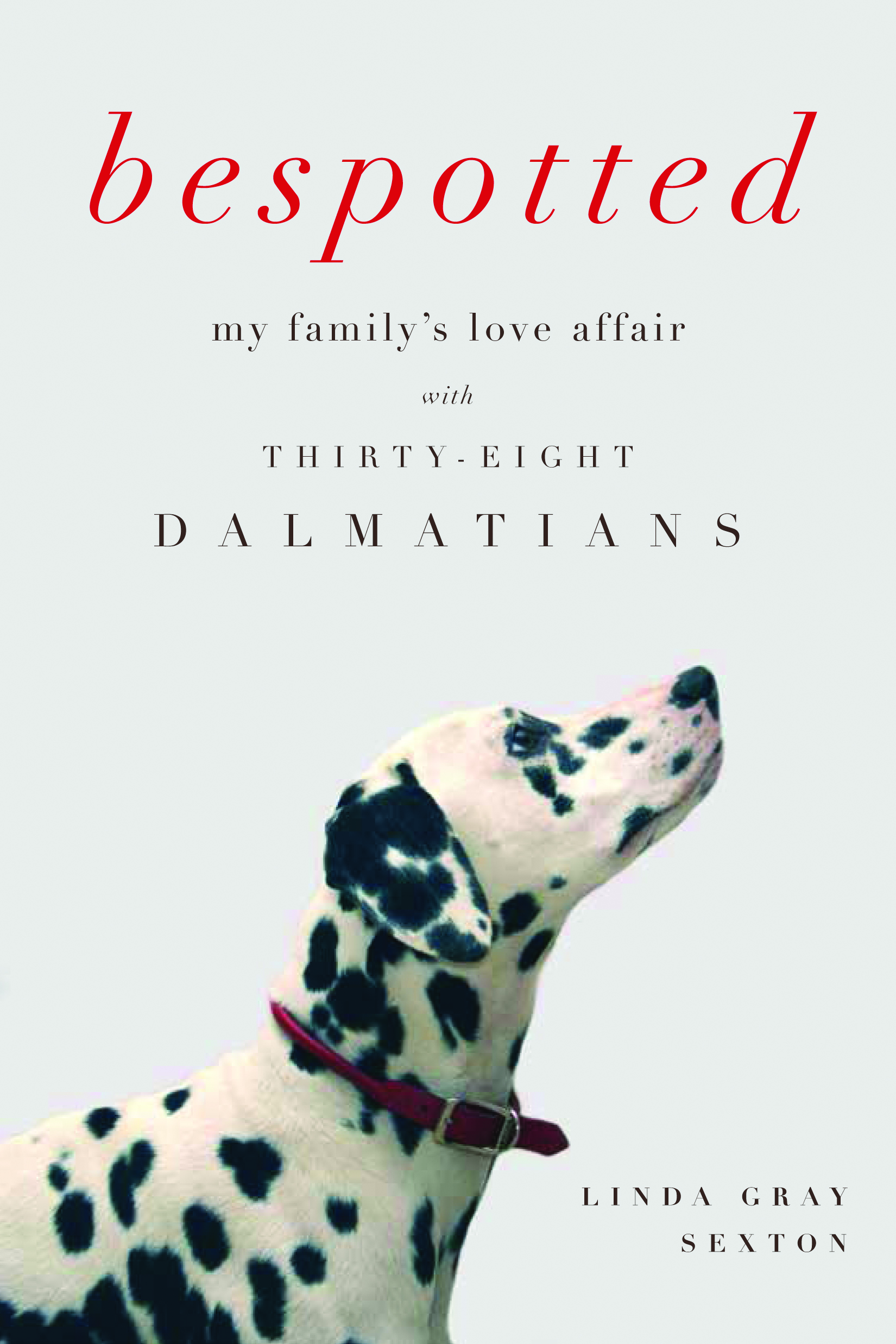 The Sexton family’s long love affair with the Dalmatian began in Linda’s childhood. There, on a snowy morning in the family home just outside Boston, LInda heard a whimpering coming from the basement. She discovered their first family dog giving birth to a litter. Witnessing the intimate act of birth had a profound effect on the family. Her mother, Anne, used the experience to complete the poem “Live,” part of her third collection, titled Live or Die , which would be awarded a Pulitzer Prize. For Linda, the boundless joy of both breed and breeding triggered in her a lifelong love of Dalmatians. All told, thirty–eight Dalmatians will move through her life: the ones that cheer and support her through difficulty, divorce, and depression; the ones that stay with her as she enters the world of professional breeding and showing of Dals; and, of course, the one true dog of her heart, Gulliver, her most stalwart of canine champions.

Bespotted is a page–turning and compelling look at the unique place dogs occupy in our lives. It captures another piece of this literary family’s history, taps into the curious and fascinating world of dog showing/dog fancy. Bespotted is an upbeat and commercial memoir by one of the most critically acclaimed memoirists of our time.

Linda Gray Sexton is the daughter of Pulitzer Prize–winning poet Anne Sexton. She has written four novels, and her second memoir, Half in Love, was published by Counterpoint in January 2011. She lives in California.

"Bespotted is a delight and a book of wisdom for all those who love dogs and people." —Erica Jong, author of Fear of Flying

"Linda Gray Sexton has added a moving and beautiful account to the shelf of books about Dogs & Their Writers. Sexton became besotted — hence her title, Bespotted — with Dalmatians as a child, and her memoir–with–dogs is a chronicle of her deep connection to this specific breed over time...It must have been extremely painful to write some of these passages; to experience and re–experience the shock and the grief of the untimely and unfair endings, the vicissitudes of biology, the love that's given and received in equal measure — here exquisitely re–imagined — between a keeper and each of her dogs." — Los Angeles Review of Books

"In Bespotted, Linda Gray Sexton slices to the heart of why the dogs in our lives are so beloved. Each Dalmatian who walks onto the page is a character in his or her own right. Bespotted is a love story, an intriguing glimpse into the world of show dogs, and a testament to the special provenance of dogs to guide humans through the darkest moments in our lives. Beautifully written and deeply felt." —Michelle Richmond, New York Times bestselling author of Golden State and The Year of Fog

"Bespotted is a brave and wonderful book. The first chapter about the origin of the famous poem by Anne Sexton, "Live," is precious both for the history it recounts with an authenticity nobody else could claim, as well as for its insight into one of the great poems of the language (hint: it is a poem made possible by dogs). Even more importantly it recognizes something that is only now becoming clear: dogs and humans are a single species, a manifestation of a single love, and this book makes that clear in a rare way." —Jeffrey Moussaieff Masson, author of When Elephants Weep and Dogs Never Lie About Love

"As the author eloquently portrays, no other breed suited the Sexton family as well...The bond between an animal and a human can be extremely strong, and Sexton proves this without a doubt. A heartfelt testimony about the importance of dogs, especially Dalmatians, in one woman's life." —Kirkus Reviews

"The inside look at the rarefied environment of dog shows is a fascinating subplot; and the decisions that must be made as well as the mechanics of breeding for show dogs will be eye–opening for many dog lovers. Sexton's paeon to dalmatians, the dogs she feels have genuinely saved her life, will resonate." —Nancy Bent

Praise for Searching for Mercy Street

"Powerful and affecting . . . a candid, often painful, depiction of a daughter's struggles to come to terms with her powerful and emotionally troubled mother. Sexton writes with compelling urgency and candor and has not tried to gloss over the difficulties of their relationship or resolve the ambivalence of her own emotions. Rather, she has set all these conflicts down on paper, leaving us with a disturbing portrait or a mercurial, impossible, and magnetic woman." —Michiko Kakutani, The New York Times

"A courageous journey into the dark terrain of remembering, forgiving and healing through telling—a trait that is her birthright." —People

"One never doubts that Linda Gray Sexton has told us the truth . . . Her writing is at its best: lean, quick, tightly conceived . . . The book almost reeks of authenticity. Searching for Mercy Street is never less than fascinating." —The New York Times Book Review

"This memoir has an urgency about it and it is to Sexton's credit as an honest and largely unself–serving narrator that throughout she has chosen to forgo the primitive gratification of scrawling over the picture of her childish mother–worship with fat black crayon; instead she continues to add strokes of color and lightness to an ever–darkening portrait. By the book's end she has made her way valiantly back to her mother, passing through the portals of rage and despair before she glimpses the possibility of separating out Anne Sexton's perverse influence from her legacy of delight in words and experience . . . Searching for Mercy Street is suffused with a complicated kind of love." —Daphne Merkin, The New Yorker

"In this spectacular story of a glamorous, talented and beautiful family veering toward disaster, Linda Sexton has broken the code of silence which often surrounds the American home. In her powerful and graceful prose, honed in four novels of her own, she has quietly and lovingly told the story of her mother and the family she loved both too much and too little. Any mother or daughter, any child of an alcoholic parent, anyone who has lived with the all–consuming obsession of a writer with their work, will recognize themselves in this ravishing portrait." —Susan Cheever

"Sexton has written about intense personal conflicts, evoked strong emotion, and stayed true to it. The saga of this daughter and her mother is inherently fascinating." —Chicago Tribune

"One of the most illuminating things here is that careful, industrious Linda—who, as she grows older, bravely fights off her own depressions, headaches, even suicidal thoughts, idolizing ‘normalcy', health, and domestic responsibility—seems a far better writer than her mom." —Carolyn See, The Washington Post Book World

"Linda Gray Sexton's exploration is so smart, so well–written, moving, and generous that it transcends the typecasting that could easily have become a trap . . . Written with grace, precision and, most important, love." —Los Angeles Times Book Review

"This cathartic and anguish–filled book spares no details of the mother's selfish and difficult personality or her intense and fortifying love." —Library Journal

"In deceptively fluid prose, Linda explores her complex relationship to her mother and strips raw the nerves of a troubled family." —Kirkus (starred review)
Don't miss news & events from Counterpoint Press.
Subscribe to the newsletter today.