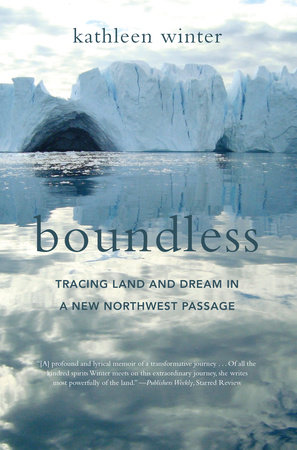 Tracing Land and Dream in a New Northwest Passage

In 2010, bestselling author Kathleen Winter (Annabel) embarked on a journey across the storied Northwest Passage, among marine scientists, historians, archaeologists, anthropologists, and curious passengers. From Greenland to Baffin Island and all along the passage, Winter bears witness to the new math of the North—where polar bears mates with grizzlies, creating a new hybrid species; where the earth is on the cusp of yielding so much buried treasure that five nations stand poised to claim sovereignty of the land; and where the local Inuit population struggles to navigate the tension between taking part in the new global economy and defending their traditional way of life.

Throughout Winter’s journey, she learns from fellow passengers such as Aaju Peter and Bernadette Dean, who teach her about Inuit society (both past and present). She bonds with Nathan Rogers, son of the late Canadian icon Stan Rogers, who died in a plane crash when Nathan was just a young boy. Nathan’s quest is to take the route his father never traveled, expect in his beloved song “The Northwest Passage,” which he performs both as anthem and lament at sea. And she guides readers through her own personal odyssey, emigrating from England to Canada as a child and discovering both what was lot and what was gained as a result of that journey.

In breathtaking prose charged with vivid descriptions of the land and its people, Kathleen Winter’s Boundless is a haunting and powerful homage to the ever–evolving and magnetic power of the North.

Kathleen Winter is the author of the bestselling novel Annabel, which won the Thomas Head Raddall Atlantic Fiction Award and was a finalist for the Scotiabank Giller Prize, the Governor General's Literary Award, the Rogers Writers' Trust Fiction Prize, the Orange Prize for Fiction, and CBC Canada Reads. A long–time resident of Newfoundland, she now lives in Montreal.

"The vessel's tight quarters give Winter plenty of room to observe her companions, and the result is an intriguing chronicle of a journey through the Northwest Passage ... her ability to toggle between nature writing and personal reflection will keep readers following in her wake."—New York Times Book Review

"[A] profound and lyrical memoir of a transformative journey ... Of all the kindred spirits Winter meets on this extraordinary journey, she writes most powerfully of the land."—Publisher's Weekly Starred Review

"Perceptive and thoughtful, Winter's ruminations on Arctic life and its continuous clashes with modern civilization are compelling and thought–provoking. The north is a place rarely visited and little understood, but it looms ever larger in our collective future, and to ignore it and its people would be an act of global arrogance."—Booklist, Starred Review

"Literate, luminous travels in the far north....Winter finds just the right note of learned wonder....With the eye of a poet and the stamina of an Amundsen, Winter proves a delightful guide into unexplored realms. Worthy of shelving alongside Barry Lopez's Arctic Dreams"—Kirkus Starred Review

"A richly detailed account of the author's voyages across Greenland, examining historic disputes and modern–day conflicts taking place at the top of the world."—Outside Magazine

"Compulsively readable… it both heightens life and plumbs its deepest mysteries, laying bare the beauty of both the world and the soul." —Globe and Mail

"Ultimately, the journey that Kathleen Winter takes on a last–minute whim is transformative. Her precise and vivid prose allows the reader to share in that transformation. For the many readers who admired Annabel and want to get to know its author better, Boundless is a tremendous gift." —Quill and Quire