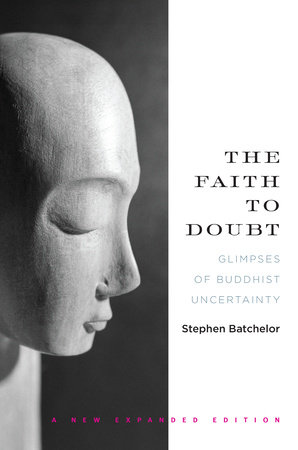 The Faith to Doubt

Kierkegaard said that faith without doubt is simply credulity, the will to believe too readily, especially without adequate evidence, and that “in Doubt can Faith begin.” All people involved in spiritual practice, of whatever persuasion, must confront doubt at one time or another, and find a way beyond it to belief, however temporary. But “faith is not equivalent to mere belief. Faith is the condition of ultimate confidence that we have the capacity to follow the path of doubt to its end. And courage.”

In this engaging spiritual memoir, Stephen Batchelor describes his own training, first as a Tibetan Buddhist and then as a Zen practitioner, and his own direct struggles along his path. “It is most uncanny that we are able to ask questions, for to question means to acknowledge that we do not know something. But it is more than an acknowledgement: it includes a yearning to confront an unknown and illuminate it through understanding. Questioning is a quest.”

Batchelor is a contemporary Buddhist teacher and writer, best known for his secular or agnostic approach to Buddhism. He considers Buddhism to be a constantly evolving culture of awakening rather than a religious system based on immutable dogmas and beliefs. Buddhism has survived for the past 2,500 years because of its capacity to reinvent itself in accord with the needs of the different Asian societies with which it has creatively interacted throughout its history. As Buddhism encounters modernity, it enters a vital new phase of its development. Through his writings, translations and teaching, Stephen engages in a critical exploration of Buddhism’s role in the modern world, which has earned him both condemnation as a heretic and praise as a reformer.

Stephen Batchelor was born in Scotland, in 1953. He grew up in a humanist environment with his mother and brother in Watford, north west of London. After completing his education at Watford Grammar School, he travelled overland to India in 1972, at the age of eighteen. He settled in Dharamsala, the capital–in–exile of the Dalai Lama, and studied at the Library of Tibetan Works and Archives. He was ordained as a novice Buddhist monk in 1974. In April 1981 he travelled to Songgwangsa Monastery in South Korea to train in Zen Buddhism under the guidance of Ven. Kusan Sunim. He is the author of several books including Alone With Others, The Awakening of the West, and Buddhism Without Beliefs. His latest book, Confessions of a Buddhist Atheist, was published in 2010.

Praise for Buddhism Without Beliefs:

"Batchelor...suggests that Buddhism jettison reincarnation and karma, thereby making possible what he calls an 'existential, therapeutic and liberating agnosticism." —Time

Praise for Confession of a Buddhist Atheist:

"While Batchelor may exaggerate the novelty of his Buddhism without beliefs stance, this multifaceted account of one Buddhist's search for enlightenment is richly absorbing." —Publishers Weekly

Praise for Living With the Devil:

"A moving and timely study of the problem of evil from a Buddhist perspective. [Batchelor] draws deeply on traditional Buddhist insights as well as stories from the legends surrounding the Buddha's life to suggest that our need to divide experience into good and evil is itself the problem… Rejecting this violence and its dualities, Batchelor suggests, will leave us free for true awareness… highly illuminating." –Library Journal
Don't miss news & events from Counterpoint Press.
Subscribe to the newsletter today.