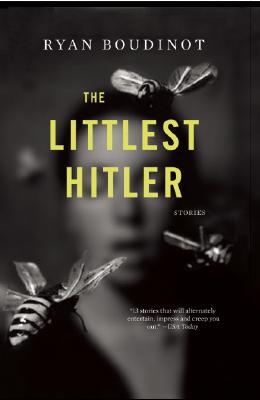 Welcome to the world of Ryan Boudinot, where a little boy who innocently dresses up as Hitler for Halloween suffers the consequences. (The Littlest Hitler); a world where a typical office romance is destroyed by the female half’s habit of coming to work covered in live bees (Bee Beard); where jacked-up salesmen go on murderous, Burgess-like rampages (The Sales Team); and the children of the future are required to kill off their parents–preferably with an ice pick–in order to be accepted to the college of their choice (Civilization). You may never want to leave.

In each of these fearless, hilarious, and tightly crafted stories, Boudinot’s voice rings with a clarity rarely seen in a debut collection. He speaks to a generation that has tried to seem disaffected but can’t help wishing for a better world. His characters shake their heads over the same messes they’re busily creating, or lash out angrily at a sex-and-violence-saturated culture. But they can never entirely lose their sense of fun, however perverse it may be.

Ryan Boudinot is a writer. He is the author of several books, including The Octopus Rises, Blueprints of the Afterlife, The Littlest Hitler: Stories, and Misconception. The latter three have been nominated for the Washington State Book Award. Blueprints of the Afterlife was also nominated for the Philip K. Dick Award and has been published in translation in the Czech Republic and Spain. He edited Seattle, City of Literature, an anthology featuring essays by over thirty writers.

Praise
"Ryan Boudinot is some kind of new and dangerous cross between Vonnegut and Barthelme." -- Dave Eggers