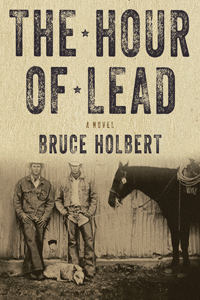 The Hour of Lead

Lonesome Animals was named as a Best Book of 2012 by both The Seattle Times and Slate, a literary debut sparking with beautiful language set against the rugged landscape of 1920s Washington state. Holbert returns with The Hour of Lead, an epic family novel and coming of age story that is once again imbibed with the mythology of the west.

After losing both his twin and his father in a brutal, unexpected snowstorm, Matt Lawson must take over the family ranch. As his mother disappears into grief, Matt learns the hardest lesson the west has to teach: he is on his own. The necessity of work stabilizes young Matt against the pitfalls of first love with Wendy, the daughter of a local grocer, and their ragged end will sent Matt on a journey across the county, leaving Wendy to tend the ranch with local schoolteacher Linda Jefferson and her unwieldy son Lucky. It will take decades for Matt to learn his way back home, and that long journey will have great impact on all of those around him.

Invoking the same beautiful landscape and language of his critically–acclaimed debut, The Hour of Lead is a wider, more expansive novel, less violent but just as affecting, another important contribution to the literature of the west.

Bruce Holbert is a graduate of the University of Iowa Writers' Workshop. His work has appeared in The Iowa Review, Hotel Amerika, Other Voices, The Antioch Review, Crab Creek Review, West Wind Review, Cairn and The New York Times. Bruce Holbert grew up on the Columbia River in the shadow of the Grand Coulee and a stone's throw from the Okanogan Mountains. His great-grandfather was an Indian scout and among the first settlers of the Grand Coulee.

Praise
"The rugged land and lives of rural Eastern Washington form the setting for Bruce Holbert's riveting and beautifully written new novel… a portrait of a disappearing way of life, lovingly told in gorgeous and moving prose." —Seattle Times

"Holbert has been compared to Cormac McCarthy, but really he brings to mind the early John Steinbeck, as in To a God Unknown, with its melodrama and twisted pantheism." —Booklist