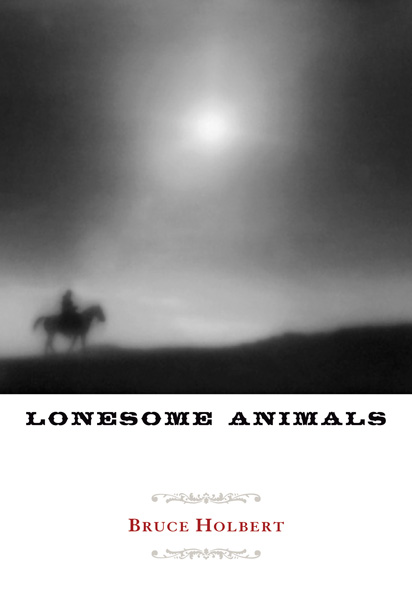 In Lonesome Animals, Arthur Strawl, a tormented former lawman, is called out of retirement to hunt a serial killer with a sense of the macabre who has been leaving elaborately carved bodies of Native Americans across three counties. As the pursuit ensues, Strawl’s own dark and violent history weaves itself into the hunt, shedding light on the remains of his broken family: one wife taken by the river, one by his own hand; an adopted Native American son who fancies himself a Catholic prophet; and a daughter, whose temerity and stoicism contrast against the romantic notions of how the west was won.

In the vein of True Gritand Blood Meridian, Lonesome Animals is a western novel reinvented, a detective story inverted for the west. It contemplates the nature of story and heroism in the face of a collapsing ethos –not only of Native American culture, but also of the first wave of white men who, through the battle against the geography and its indigenous people, guaranteed their own destruction. But it is also about one man’s urgent, elegiac search for justice amidst the craven acts committed on the edges of civilization.

Bruce Holbert is a graduate of the University of Iowa Writers' Workshop. His work has appeared in The Iowa Review, Hotel Amerika, Other Voices, The Antioch Review, Crab Creek Review, West Wind Review, Cairn and The New York Times. Bruce Holbert grew up on the Columbia River in the shadow of the Grand Coulee and a stone's throw from the Okanogan Mountains. His great–grandfather was an Indian scout and among the first settlers of the Grand Coulee.

"From the opening sentence of Holbert's remarkable debut, it is obvious that we are in the hands of a master storyteller . . . Holbert's prose is simultaneously roughly hewn and elegant, and recalls Cormac McCarthy at his best, as do his insights into the relationship between predator and prey. Call it literary fiction, classic western realism, or historical noir, Holbert is a writer of formidable skill and this auspicious debut should have considerable crossover appeal." —Publishers Weekly (starred)

"Holbert's unsettling book demands a strong stomach… At the end the reader will feel relief or satisfaction or some combination, and tip a sweat–stained hat to Holbert for raising the stakes of the Western genre… Holbert's sympathies seem to align with the quality of his prose: the land is rendered in loving, even exquisite detail, so too the crimes… Holbert has gone all–in: This book is audacious." —Kirkus

"A gripping murder story and incandescent moral fable, set in hardscrabble Eastern Washington during the Great Depression. Retired lawman Russell Strawl is literally back in the saddle, hired to roam the land and find the brutal killer of local Indians. What he learns is shocking but, in retrospect, inevitable. Added punch: Spokane resident Holbert loosely based Strawl on his great–grandfather — Indian scout, early settler and all–around tough old bastard." —Seattle Times, Best Mysteries of 2012

"Lonesome Animals is an impure marvel. Ths cowboy noir is loaded with lyrical detail, black humor, and a kind of antic despair. At its center is the compromised lawman Russell Strawl, a pilgrim making slow progress through the blasted ruins of Western myth. He turns violence into a kind of brutal music and provides the weary, stubborn heart of this astonishing debut."
—Max Phillips, Shamus–winning author of Fade to Blonde

"Lonesome Animals is dark, beautiful, compelling, strange, vivid; part Western, part detective story, altogether brilliant. With the authority of myth, it is a book obsessed with justice and history, and its two main characters—the retired lawman Russell Strawl and his prophet son Elijah—are as harrowing and moving a marriage as I have read in years. It's an incredible book by an incredible author. It will break your heart and leave you gasping."—Elizabeth McCracken, author of The Giant's House

"Lonesome Animals is exhilarating. The dialogue will blow your hair back, the description of land is prose poetry, and the violence is shocking for its intensity and sudden occurrence. This is a study of morality in a world that has lost its morals, a work that transcends its epic story of good versus evil. No character is spared and neither is the reader. Bruce Holbert's fierce novel will enter the canon as a classic." —Chris Offutt, author of Kentucky Straight

"A lyrical, almost poetic novel. Holbert vividly captures the essence of his characters and of the place that spawned them in Lonesome Animals." —Mystery Maven Blog
Don't miss news & events from Counterpoint Press.
Subscribe to the newsletter today.