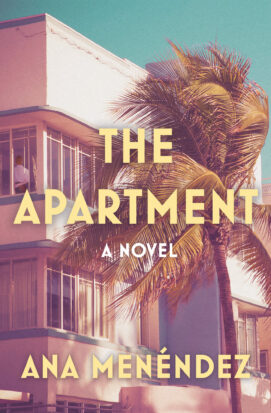 Bristling with compassion, desire, and a longing to connect, The Apartment is a portrait of the complex and at times troubled inhabitants of a single unit in a South Miami Beach building—an excavation of the literal and figurative ghosts that haunt our lives and a celebration of the communities that shine brightest in our darkest moment

An art-deco sentinel, The Helena apartment building has silently witnessed the changing face of South Miami Beach for seventy years, observing—without interfering—the countless lives housed within its walls. But a single unit has seen more life (and sometimes death) than others. Those who have called Apartment 2B home include: a Cuban concert pianist who now only plays in a nursing home; the widow of an intelligence officer raising their young daughter alone; a man waiting on a green card marriage to run its course so that he can divorce his wife and marry his lover, all of whom live together in 2B; a Tajik building manager with a secret identity; a Vietnam vet receiving packages from his ex-wife. Each tenant imbues 2B with energy that can either heal or overwhelm the latest resident, Lana.

A mysterious woman struggling with her own demons, Lana mourns her beloved while unaware of the apartment’s sometimes tragic history. Distraught and alone, she is watched over by a ghost, and together these two strangers brought into community by The Helena will find a measure of comfort and purpose, gaining a new insight into what we all owe one another.

Ana Menéndez has published four books of fiction: Adios, Happy Homeland!, The Last War, Loving Che, and In Cuba I Was a German Shepherd. She has worked as a journalist in the United States and abroad, lastly as a prize-winning columnist for The Miami Herald. As a reporter, she wrote about Cuba, Haiti, Kashmir, Afghanistan, and India. Her work has appeared in Vogue, Bomb Magazine, The New York Times, and Tin House and has been included in several anthologies, including The Norton Anthology of Latino Literature. She has a B.A. in English from Florida International University and an M.F.A. from New York University. From 2008 to 2009, she lived in Cairo as a Fulbright Scholar. She has also lived in India, Turkey, Slovakia, and The Netherlands, where she designed a creative writing minor at Maastricht University in 2011. She is currently an associate professor at Florida International University with joint appointments in English and the Wolfsonian Public Humanities Lab.