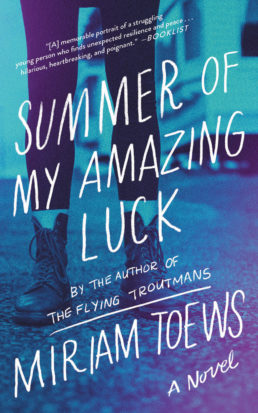 Summer of My Amazing Luck

“[A] memorable portrait of a struggling young person who finds unexpected resilience and peace . . . Hilarious, heartbreaking, and poignant.” —Booklist

Miriam Toews welcomes her readers to the Have-a-Life housing project (better known as Half-a-Life). The welfare regulations are endless and the rate-fink neighbors won’t mind their own business. Lucy Von Alstyne sends fictitious letters to her friend Alicia, pretending to be the father of Alicia’s twins. When the two mothers and their five children set off on a journey to find him, facing along the way the complications of living in poverty and raising fatherless children, Lucy discovers this just may be the summer of her amazing luck.
About Miriam Toews