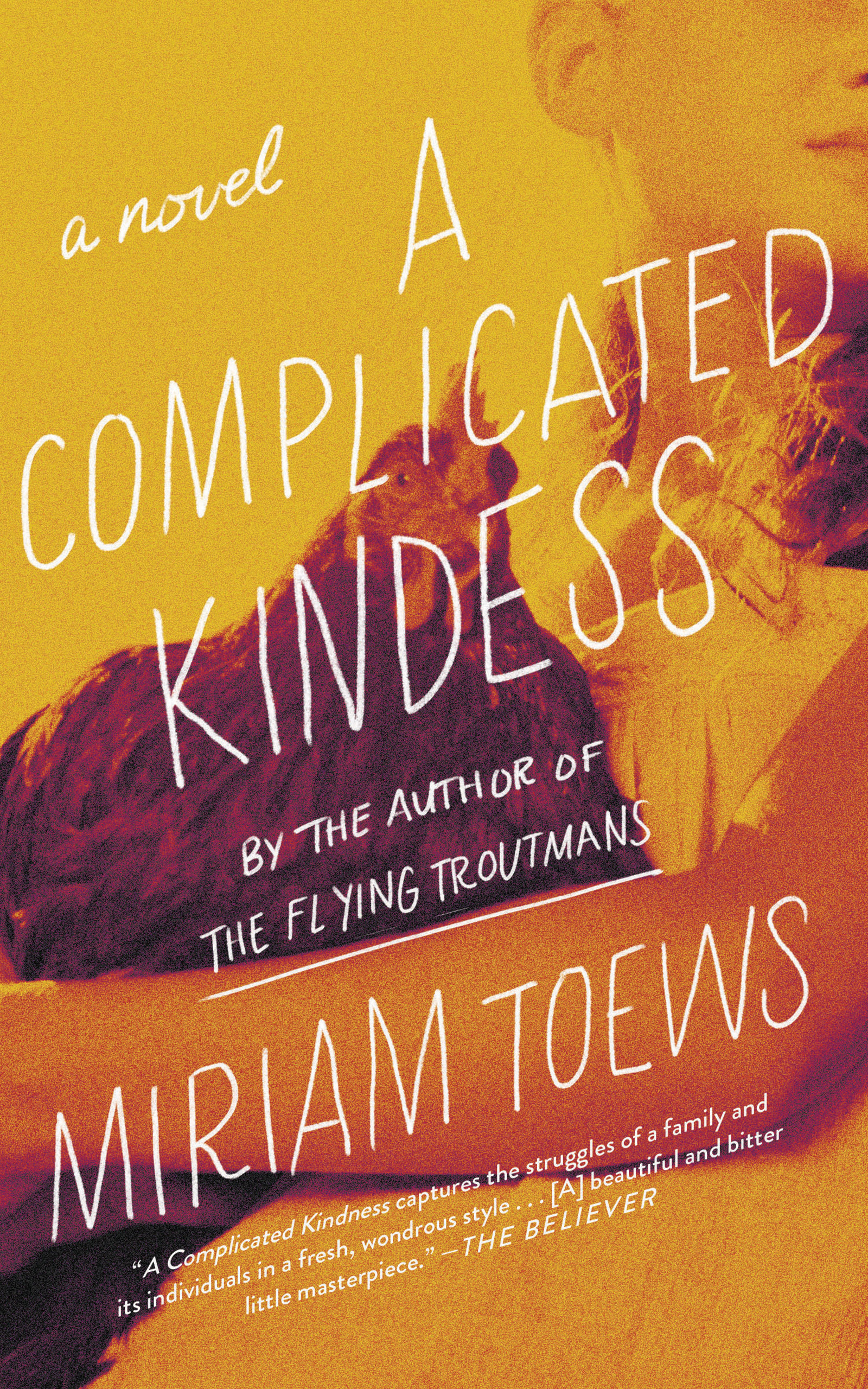 This “darkly funny and provocative” coming-of-age novel balances grief and hope in the voice of a witty teenage girl whose Canadian family is shattered by fundamentalist Christianity (O, The Oprah Magazine).

From the author of Women Talking—soon to be a major motion picture starring Claire Foy, Rooney Mara, Frances McDormand, and Jessie Buckley

“Half of our family, the better–looking half, is missing,” Nomi Nickel tells us at the beginning of A Complicated Kindness. Left alone with her sad, peculiar father, her days are spent piecing together why her mother and sister have disappeared and contemplating her inevitable career at Happy Family Farms, a chicken slaughterhouse on the outskirts of East Village. Not the East Village in New York City where Nomi would prefer to live, but an oppressive town founded by Mennonites on the cold, flat plains of Manitoba, Canada.

This darkly funny novel is the world according to the unforgettable Nomi, a bewildered and wry sixteen–year–old trapped in a town governed by fundamentalist religion and in the shattered remains of a family it destroyed. In Nomi’s droll, refreshing voice, we’re told the story of an eccentric, loving family that falls apart as each member lands on a collision course with the only community any of them have ever known. A work of fierce humor and tragedy by a writer who has taken the American market by storm, this searing, tender, comic testament to family love will break your heart.

Miriam Toews is the author of A Complicated Kindness, winner of the Governor General's Award and finalist for the Giller Prize, A Boy of Good Breeding, and Swing Low: A Life. She has written for "This American Life," and The New York Times Magazine. She lives in Winnipeg, Manitoba.

"There is a Plautdietsch term, schputting, for irreverence directed at serious or sacred things. In conversation, as in art, Toews is a schputter; she likes to puncture anything that has a whiff of pretension or self–importance about it . . . [A Complicated Kindness] is a master class in schputting."
—Alexandra Schwartz, The New Yorker

"Offering incisive reflections on life, death and Lou Reed, the black–sheep Nomi is clearly wise beyond her years, and her voice is unique. The road to anywhere else may be rough for her, but her angst–ridden journey is unforgettable."
—People Magazine

"A darkly funny and provocative novel."
—O, the Oprah Magazine

"[A Complicated Kindness] offers a primer on Mennonite ways through her enormously appealing 16–year–old protagonist, Nomi . . . As a stand–in for the author, Nomi has an acidic wit and a keen eye for calling out hypocrisy . . . If Nomi portrays the rest of her family with more compassion than an angry teenager might, then A Complicated Kindness is a prototypical Miriam Toews novel. So much of Toews’ work features her actual family in various forms: We meet versions of her mother, father, and older sister over and over again in her novels, and she’s forgiving and admiring of all three even as they suffer under the weight of their religion."
—Maris Kreizman, BuzzFeed

"Why the compulsion to laugh so often and so heartily when reading A Complicated Kindness? That's the book's mystery and its miracle. Has any of our novelists ever married, so brilliantly, the funny—and I mean posture–damaging, shoulder–heaving, threaten–the–grip–of–gravity–on–recently–ingested–food brand of funny—and the desperately sad —that would be the three–ply–tissue, insufficient–to–the–day, who–knew–I–had–this–much–snot–in–me brand of sad? I don't think so."
—The Globe and Mail

"There have been a lot of Holden Caulfield knockoffs since 1951, but few authors have been as successful as J.D. Salinger in channeling adolescent angst in a way that's as charming as it is profound. Miriam Toews hits that elusive mark with her new novel. In fact, A Complicated Kindness just may be a future classic in its own right."
—Philadelphia Inquirer

"Miriam Toews, the award winning Canadian author, embodies Nomi's voice with such an authentic and manic charm that it's hard not to fall in love with her . . . A Complicated Kindness captures the struggles of a family and its individuals in a fresh, wondrous style. Despite this complexity of family tensions, much of A Complicated Kindness is pleasantly plotless. The looseness of Nomi's worldview, the sometimes blurry nonfocus of it, the unexpected sideways humor, make this book the beautiful and bitter little masterpiece it is."
—The Believer

"Who says novels aren't political? A Complicated Kindness by Canadian Miriam Toews, is the story of a wise, funny, unhappy teenager whose family is destroyed by fundamentalist Christianity."
—New York Post

"Truly wonderful . . . A Complicated Kindness is . . . one of the year's exuberant reads. Toews recreates the stultifying world of an exasperated Mennonite teenager in a small town where nothing happens with mesmerizing authenticity . . . Toews seduces the reader with her tenderness, astute observation and piquant humour. But then she turns the laughs she's engendered in the reader like a knife."
—Toronto Star

"Bold, tender and intelligent, this is a clear–eyed exploration of belief and belonging, and the irresistible urge to escape both."
—Publishers Weekly

"Although Nomi's story is depressing, her wry observations reflect normal adolescent angst leavened with a distinctly parochial irreverence. Teens with real issues as well as those who would benefit by realizing that they don't have it so bad will find sadness and hope in Nomi's thoughtful musings and root for her survival. The story is a metaphor for those torn between a present lack of fulfillment and the fear of moving toward the unfamiliar–in other words, growing up."
—School Library Journal

"Toews captures the spurts and lurches of adolescent growth in a tale as crude and fresh as its subject matter."
—Kirkus Reviews

"A Complicated Kindness is just that: funny and strange, spellbinding and heartbreaking, this novel is a complicated kindness from a terrifically talented writer."
—Gail Anderson–Dargatz, author of The Spawning Grounds

"It is a complicated kindness indeed that gives us this book. Miriam Toews has written a novel shot through with aching sadness, the spectre of loss, and unexpected humor. You want to reach inside and save 16–year–old Nomi Nickel, send her the money for a plane ticket to New York, get her a cab to CBGB's on the Bowery and somehow introduce her to Lou Reed. It might seem an odd metaphor to use about someone who has authored such a vivid, anguished indictment of religious fundamentalism, but Miriam Toews writes like an angel."
—David Rakoff, author of Fraud

"The narrator of this novel, Nomi Nickel, is wonderful. She scrapes away the appearances in her small town and offers what she finds in a voice that is wry, vulnerable, sacrilegious and, best of all, devastatingly funny. This is Miriam Toews at her best."
—David Bergen, author of The Case of Lena S.
Don't miss news & events from Counterpoint Press.
Subscribe to the newsletter today.