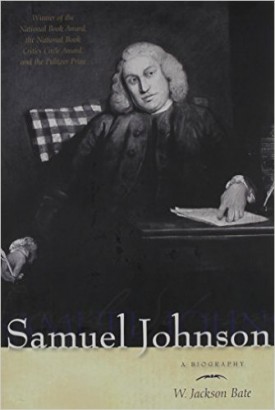 Samuel Johnson is a writer of such significance that his era — the second half of the 18th century — is known as the Age of Johnson. Starting out as a Grub Street journalist, he made his mark on history as a poet, author, moralist, literary critic, political commentator, and lexiconographer. We, as moderns, need to know this man, and W. Jackson Bate’s formidable biography, with its uncanny depth and empathy, is the book that makes that happen.

Professor W. Jackson Bate is a lyrical writer who deftly explains the effect Johnson has had on scholars, critics, and readers of all kinds through the past 200 years: “The reason Johnson has always fascinated so many people of different kinds,” Bate writes, “is not simply that [he] is so vividly picturesque and quotable . . . The deeper secret of his hypnotic attraction, especially during our own generation, lies in the immense reassurance he gives to human nature.”

Bate delves deep into the character that formed Johnson’s intellect and fueled his prodigious contribution to literature, religion, politics, and our understanding of the nature of humankind, revealing the fascinating nature — both odd and adored — of this literary luminary.

Walter Jackson Bate was an American literary critic and biographer. He is known for Pulitzer Prize for Biography or Autobiography-winning biographies of Samuel Johnson and John Keats. Samuel Johnson also won the 1978 U.S. National Book Award in Biography.

Praise
“Perhaps the supreme virtue of Bate’s book is that it makes us comprehend how little we have known Johnson and how much he has to offer those who, like himself, seek ‘the consolation of biography.’” --San Francisco Chronicle

“No other biographer of Johnson has meditated so profitably on the qualities that made him ‘a heroic, intensely honest, and articulate pilgrim in the strange adventure of human life.’” --Time

“Clearly the best modern life of Johnson . . . Bate’s empathy is so convincing that one has the uncanny illusion of experiencing Johnson’s struggles inside his skin.” --Newsweek

“What Prof. Bate has done is to restore the whole Johnson, the very human, very admirable man behind the monument.” --Los Angeles Times Book Review