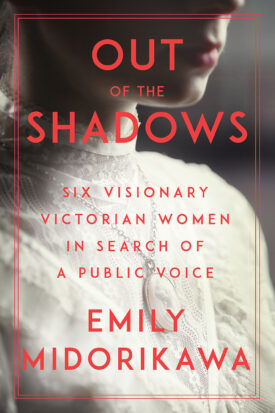 Queen Victoria’s reign was an era of breathtaking social change, but it did little to create a platform for women to express themselves. But not so within the social sphere of the séance–a mysterious, lamp-lit world on both sides of the Atlantic, in which women who craved a public voice could hold their own.

Out of the Shadows tells the stories of the enterprising women whose supposedly clairvoyant gifts granted them fame, fortune, and, most important, influence, as they crossed rigid boundaries of gender and class as easily as they passed between the realms of the living and the dead. The Fox sisters inspired some of the era’s best-known political activists and set off a transatlantic séance craze. While in the throes of a trance, Emma Hardinge Britten delivered powerful speeches to crowds of thousands. Victoria Woodhull claimed guidance from the spirit world as she took on the millionaires of Wall Street before becoming America’s first female presidential candidate. And Georgina Weldon narrowly escaped the asylum before becoming a celebrity campaigner against archaic lunacy laws.

Drawing on diaries, letters, rarely seen memoirs and texts, Emily Midorikawa illuminates a radical history of female influence that has been confined to the dark until now.

Emily Midorikawa is the coauthor of A Secret Sisterhood: The Literary Friendships of Jane Austen, Charlotte Brontë, George Eliot and Virginia Woolf. Her work has been published in the Washington Post, the Paris Review, Lapham's Quarterly, TIME.com, and elsewhere. She is a winner of the Lucy Cavendish Fiction Prize and was a runner-up in the SI Leeds Literary Prize and the Yeovil Literary Prize. She teaches at New York University-London.

Praise
Praise for Out of the Shadows:

"Astonishing, gripping, and almost eerily timely. Midorikawa’s tender, elegant prose is a joy to read and her fascination with her subjects irresistible." —Julie Myerson, author of The Stopped Heart

"This book is a treasure--a little known history about forgotten movers and shakers, women who influenced our country in unimaginable, and unseen (to say the least) ways. Reader: you need this book! Take it home with you and learn about a potent part of our history that you didn't know you needed to know. Written with seamless clarity, Midorikawa has produced another true gem. I LOVE THIS BOOK." --Mira Ptacin, author of The In-Betweens: The Spiritualists, Mediums, and Legends of Camp Etna

"Public speaking was a disreputable occupation for Victorian-era women--unless they were communicating with the dead, a skill that turned out to be much in demand and often quite lucrative. Emily Midorikawa's account of six women who were adept at working psychic miracles offers a fascinating new view of fame, belief, and feminism." --Laura Shapiro, author of What She Ate: Six Remarkable Women and the Food that Tells Their Stories

“I was captivated by Midorikawa’s vivid portraits of Victorian-era women who used their Spiritualism to rise from obscurity and poverty to astonishing, often dizzying, social and political influence. Out of the Shadows brings to the fore the forgotten histories of these bold, radical, ambitious and complicated women, who campaigned for women’s equal rights and suffrage, and even to become America’s first female president—all while channeling the voices and guidance of the dead. Meticulously researched, engrossing, poignant and often very humorous, Out of the Shadows does a huge service to feminist history.” —Susan Barker, author of The Incarnations

"In this fast-paced, engaging book, Emily Midorikawa shows that, for six nineteenth-century women, communicating with the dead was the best way of claiming a public voice. No stereotype of Victorian ladyhood survives. From Wall Street to presidential campaigns, from the courtroom to the stage, these women captivated their audiences and made serious claims about society in the process. Midorikawa tells their stories with sensitivity and grace, moving between the personal, the political, and the phantasmagoric with a sure step and a keen eye for detail." —Dr. Mo Moulton, author of The Mutual Admiration Society: How Dorothy L. Sayers and Her Oxford Circle Remade the World for Women

Praise for A Secret Sisterhood:

"In digging up the forgotten friendships chronicled in A Secret Sisterhood, Emily Midorikawa and Emma Claire Sweeney have done much service to literary history . . . These four women, however iconic they have now become, were not two-dimensional icons, nor were they plaster angels: they were real people, with all the neediness, anxiety, ardor, and complexity that come with the territory." —Margaret Atwood, from the foreword