Emily Midorikawa is the coauthor of A Secret Sisterhood: The Literary Friendships of Jane Austen, Charlotte Brontë, George Eliot, and Virginia Woolf. Her work has been published in The Washington Post, The Paris Review, Lapham’s Quarterly, Time, and elsewhere. She is a winner of the Lucy Cavendish Fiction Prize and was a runner-up for the SI Leeds Literary Prize and the Yeovil Literary Prize. She teaches at New York University London. 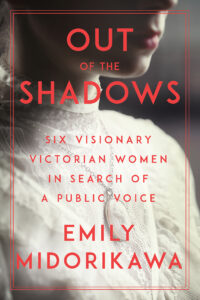 Queen Victoria's reign was an era of breathtaking social change, but it did little to create a platform for women to express themselves. But not so within the social sphere of the séance—a mysterious, lamp-lit world on both sides of the Atlantic, in which women who craved a public voice could hold their own.

Out of the Shadows tells the stories of the enterprising women whose supposedly clairvoyant gifts granted them fame, fortune, and most important, influence as they crossed rigid boundaries of gender and class as easily as they passed between the realms of the living and the dead.

The Fox sisters inspired some of the era’s best-known political activists and set off a transatlantic séance craze. While in the throes of a trance, Emma Hardinge Britten delivered powerful speeches to crowds of thousands. Victoria Woodhull claimed guidance from the spirit world as she took on the millionaires of Wall Street before becoming America’s first female presidential candidate. And Georgina Weldon narrowly escaped the asylum before becoming a celebrity campaigner against archaic lunacy laws.

Drawing on diaries, letters, and rarely seen memoirs and texts, Emily Midorikawa illuminates a radical history of female influence that has been confined to the dark until now.