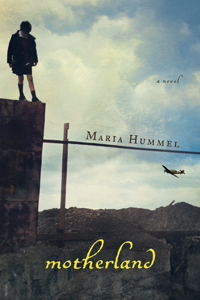 A “haunting . . . searing and honest” (People) family saga inspired by Maria Hummel’s own extended family and their status as Mitläufer, Germans who “went along” with Nazism, reaping its benefits and later paying the consequences.

Inspired by the stories told by her father about his German childhood and letters between her grandparents that were hidden in an attic wall for fifty years, Motherland is a novel that attempts to reckon with the paradox of the author’s father—a product of her grandparents’ fiercely protective love—and their status as passive Nazi–sympathizers known as Mitläufer.

At the center of Motherland lies the Kappus family: Frank is a reconstructive surgeon who lost his beloved wife in childbirth. Two months later, just before being drafted into medical military service, Frank marries a young woman charged with looking after the surviving baby and his two grieving sons. Alone in the house, Liesl attempts to keep the children fed with dwindling food supplies, safe from the constant Allied air attacks and the tides of desperate refugees flooding their town. When one child begins to mentally unravel, Liesl must discover the source of the boy’s infirmity or lose him forever to Hadamar, the infamous hospital for “unfit” children.

Bearing witness to the shame and courage of Third Reich families during the devastating final days of the war, each family member’s fateful choice leads the reader deeper into questions of complicity and innocence, and to the novel’s heartbreaking and unforgettable conclusion.

“Hummel’s haunting novel is set in the ravaged landscape of German just before the country’s collapse at the end of World War . . . Searing and honest, her book illuminates the reality of war away from the front lines—betrayal and compromise, neighbor turning on neighbor, the unexpected heroism of ordinary people—with a compassion and depth of understanding that will touch your heart.” —People, four stars

Maria Hummel is a novelist and poet. Her most recent novel, Still Lives, was a Reese Witherspoon x Hello Sunshine Book Club pick, Book of the Month Club pick, and BBC Culture Best Book of 2018, and has been optioned for television and translated into multiple languages. She is also the author of Motherland, a San Francisco Chronicle Book of the Year; and House and Fire, winner of the APR/Honickman Poetry Prize. She has worked and taught at The Museum of Contemporary Art, Los Angeles; Stanford University; and the University of Vermont. She lives in Vermont with her husband and sons.

Praise
Maria Hummel is the author of the novels Wilderness Run and House and Fire(Copper Canyon, 2013), winner of the APR/Honickman First Book prize in poetry. Her poetry and prose have appeared in Poetry, New England Review, Ploughshares, The Sun, and The Believer. Her work was also featured in the 2012 Pushcart Prize anthology, and she was a finalist in Narrative's second Annual Poetry Contest. A former Stegner Fellow in Poetry, Hummel is a Jones Lecturer at Stanford University and lives with her husband and sons in San Francisco