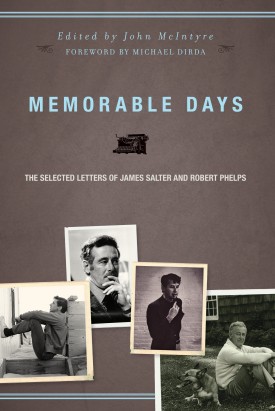 The Selected Letters of James Salter and Robert Phelps

“[A] well–edited collection . . . More than friends and less than lovers, Salter and Phelps were literary soul mates.” —Publishers Weekly

It was James Salter’s third novel, A Sport and a Pastime—together with his film Three and a script he had written for Downhill Racer—that in 1969 prompted Robert Phelps to write a letter of admiration. Though the two writers didn’t know each other, their correspondence went on to span decades.

The letters themselves are exceptionally alive, uninhibited, gossipy, touching, and brilliant. The successes of Salter and the struggles of Phelps are fully explored by the writers themselves in the kind of honest exchange only letters can divulge. With an insightful foreword by Michael Dirda, this book gives voice to a nearly forgotten figure and his friendship with a man he admired.

"Salter particularly rewards those for whom reading is an intense pleasure."-Susan Sontag

"Sentence for sentence Salter is the master."-Richard Ford