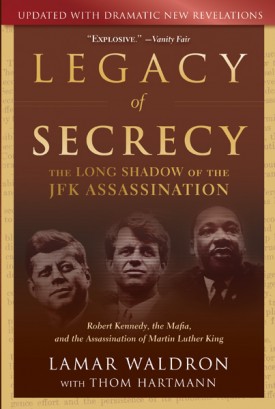 The Long Shadow of the JFK Assassination

From the authors of Ultimate Sacrifice—”Explosive new material, based mainly on government documents from the National Archives” (Vanity Fair).

John F. Kennedy’s assassination launched a frantic search to find his killers. It also launched a flurry of covert actions by Lyndon Johnson, Robert F. Kennedy, and other top officials to hide the fact that in November 1963, the United States was on the brink of invading Cuba as part of a JFK–authorized coup. The coup plan’s exposure could have led to a nuclear confrontation with Russia, but the cover–up prevented a full investigation into Kennedy’s assassination, a legacy of secrecy that would impact American politics and foreign policy for the next forty–five years. It also allowed two men who confessed their roles in JFK’s murder to be involved in the assassination of Dr. Martin Luther King in 1968. Exclusive interviews and newly declassified files from the National Archives document in chilling detail how three mob bosses were able to prevent the truth from coming to light until now.

The trade paperback is updated with dramatic new revelations, has three new chapters, an expanded photo-document section, and updated text throughout, including the completed story of how three powerful Mafia bosses used John and Robert Kennedy’s top–secret plan of staging a coup against Fidel Castro to murder JFK.

“A riveting take on the assassination itself and the devastating results of government secrets, this account proves the continuing relevancy and importance of seeking the truth behind one of the US’s most personal tragedies.” —Publishers Weekly (starred review)

Waldron's work was praised by Ronald Goldfarb, a top Mafia prosecutor for Robert Kennedy in 1963, marking the first time in over twenty years a book about JFK's assassination has been recommended by someone who worked closely with John or Robert Kennedy. Waldron's research has also been endorsed by veteran FBI agent William Turner and noted Kennedy biographer John H. Davis. Waldron's discoveries have also been featured on the History Channel and in Vanity Fair. He received undergraduate and graduate degrees from Georgia State University, and worked in the criminal justice field for seven years before beginning his writing career. THOM HARTMANN (co-author) Thom Hartmann is a best-selling author and national radio host for Air America. Heard by millions of radio listeners daily, Hartmann is the author of 17 books, including The Last Hours of Ancient Sunlight, which helped to inspire Leonardo DiCaprio's recent documentary The 11th Hour, which features Hartmann. His other books include: We the People; Unequal Protection; What Would Jefferson Do, and Screwed: The Undeclared War Against the Middle Class-And What We Can Do About It. Hartmann was prominently featured in countless media outlets, including NPR and BBC radio, CNN television, the front page of The Wall Street Journal, and Time Magazine.
Praise
"Explosive new material, based mainly on government documents from the National Archives." —Vanity Fair

"[Legacy of Secrecy contains] over 800 pages of intricately documented data. Their findings add pieces to one of our most perplexing puzzles, and suggest where the key missing pieces may be found." —Ronald Goldfarb, Daily Beast