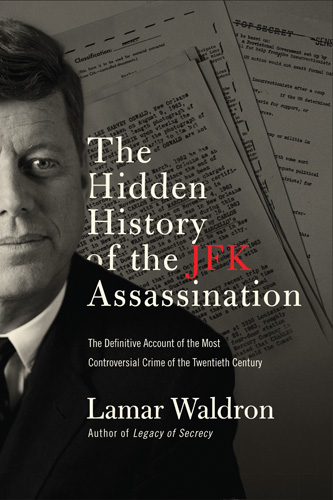 The Hidden History of the JFK Assassination

November 22, 2013 marks the 50th anniversary of the tragedy that has haunted America ever since. For the first time, this concise and compelling book pierces the veil of secrecy to fully document the small, tightly–held conspiracy that killed President John F. Kennedy. It explains why he was murdered, and how it was done in a way that forced many records to remain secret for almost fifty years.

The Hidden History of JFK’s Assassination draws on exclusive interviews with more than two dozen associates of John and Robert Kennedy, in addition to former FBI, Secret Service, military intelligence, and Congressional personnel, who provided critical first–hand information. The book also uses government files—including the detailed FBI confession of notorious Mafia godfather Carlos Marcello—to simply and clearly reveal exactly who killed JFK. Using information never published before, the book uses Marcello’s own words to his closest associates to describe the plot. His confession is also backed up by a wealth of independent documentation.

This book builds on the work of the last Congressional committee to investigate JFK’s murder, which concluded that JFK ‘was probably assassinated as a result of a conspiracy,” and that godfathers [“Santo] Trafficante [and Carlos] Marcello had the motive, means, and opportunity to assassinate President Kennedy.” However, it also draws on exclusive files and information not available to Congress, that have only emerged in recent years, to fully explain for the first time how Marcello and Trafficante committed—and got away with—the crime of the 20th century.

Some of the book’s revelations will be dramatized in the upcoming Warner Brothers film Legacy of Secrecy, produced by and starring Leonardo DiCaprio, which also stars Robert De Niro as Carlos Marcello.

The Hidden History of JFK’s Assassination is the definitive account of the crime and the secrecy which has surrounded it.

Lamar Waldron's groundbreaking research has been cited in media outlets ranging from Vanity Fair and The New Republic to the History Channel and USA Today. His work has been acknowledged by authors such as Anthony Summers and Gus Russo, historians like Dr. John Newman and John H. Davis, and former goverment investigators Gaeton Fonzi and FBI veteran WIlliam Turner. Waldron received both undergraduate and graduate degrees from Georgia State University and lives in Atlanta.

Thon Hartmann is the award–winning, best–selling author of fourteen books currently in print in over a dozen languages. An internationally known speaker, his most recent books are The Edison Gene, The Last Hours of Ancient Sunlight, Unequal Protection, We the People: A Call to take Back America, and What Would Jefferson Do? His nationally syndicated radio show is currently on Air America and Sirius Satellite Radio.