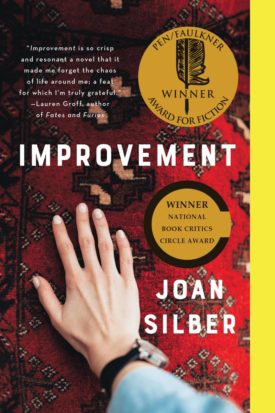 WINNER FOR THE 2018 PEN/FAULKNER AWARD FOR FICTION

WINNER OF THE NATIONAL BOOK CRITICS CIRCLE AWARD FOR FICTION AUTHOR IS THE WINNER OF THE 2018 PEN/MALAMUD AWARD FOR EXCELLENCE IN THE SHORT STORY Named 1 of 6 New Paperbacks You Should Read in August by Vulture
Named 1 of 10 Top Fiction Titles of 2017 by the Wall Street Journal
Named 1 of 50 Notable Works of Fiction in 2017 by The Washington Post
A New York Times Book Review Paperback Row Selection
A Newsday Best Book of 2017
A Kirkus Best Book of 2017
A New York Times Book Review Editor’s Choice One of our most gifted writers of fiction returns with a bold and piercing novel about a young single mother living in New York, her eccentric aunt, and the decisions they make that have unexpected implications for the world around them. Reyna knows her relationship with Boyd isn’t perfect, yet as she visits him throughout his three-month stint at Rikers Island, their bond grows tighter. Kiki, now settled in the East Village after a journey that took her to Turkey and around the world, admires her niece’s spirit but worries that she always picks the wrong man. Little does she know that the otherwise honorable Boyd is pulling Reyna into a cigarette smuggling scheme, across state lines, where he could risk violating probation. When Reyna ultimately decides to remove herself for the sake of her four-year-old child, her small act of resistance sets into motion a tapestry of events that affect the lives of loved ones and strangers around them. A novel that examines conviction, connection, and the possibility of generosity in the face of loss, Improvement is as intricately woven together as Kiki’s beloved Turkish rugs, as colorful as the tattoos decorating Reyna’s body, with narrative twists and turns as surprising and unexpected as the lives all around us. The Boston Globe says of Joan Silber: “No other writer can make a few small decisions ripple across the globe, and across time, with more subtlety and power.” Improvement is Silber’s most shining achievement yet. “This is a novel of richness and wisdom and huge pleasure. Silber knows, and reveals, how close we live to the abyss, but she also revels in joy, particularly the joy that comes from intimate relationships . . . [A] perfectly balanced mix of celebration and wryness.” —The New York Times Book Review “[I]t feels vital to love Silber’s work. . . Now is the moment to appreciate that she is here, in our midst: our country’s own Alice Munro. Silber’s great theme as a writer is the way in which humans are separated from their intentions, by desires, ideas, time. . . Like Grace Paley and Lucia Berlin, she’s a master of talking a story past its easiest meaning; like Munro, a master of the compression and dilation of time, what time and nothing else can reveal to people about themselves.” —Washington Post
About Joan Silber

JOAN SILBER is the author of eight books of fiction and the recipient of the 2018 PEN/Malamud Award for Excellence in the Short Story. The most recent, Improvement, is the winner of the 2018 PEN/Faulkner Award for Fiction and the National Book Critics Circle Award for Fiction. and was listed as one of the year's best books by the Washington Post, the Wall Street Journal, Newsday, the Seattle Times, and Kirkus Reviews. Her previous book, Fools, was longlisted for the National Book Award and a finalist for the PEN/Faulkner Award. Other works include The Size of the World, finalist for the LA Times Fiction Prize, and Ideas of Heaven, finalist for the National Book Award and the Story Prize. She lives in New York and teaches at Sarah Lawrence College and in the Warren Wilson MFA Program.