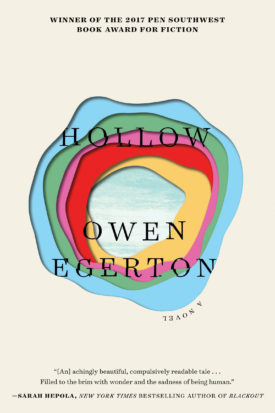 Winner of the 2017 PEN Southwest Book Award for Fiction

An NPR Best Book of 2017 “With the kind of grace not usually seen in accessible modern fiction, Egerton also invokes many other things with this central metaphor . . . The core of Hollow is anything but.” –NPR “An incredibly imaginative examination of grief, faith, and the relationship between the two.” –B&N Reads, 1 of 12 Must-Read Indie Books “I was blown away by Owen Egerton’s achingly beautiful, compulsively readable tale . . . Hollow is filled to the brim with wonder and the sadness of being human.” –Sarah Hepola, New York Times bestselling author of Blackout When Oliver Bonds loses his toddler son, his life is upended. It’s only when he becomes convinced that the Earth is hollow that Oliver chases after this most unlikely of miracles, searching for a way to escape his past.
About Owen Egerton

OWEN EGERTON is the author of two novels, The Book of Harold and Everyone Says That at the End of the World, and one story collection, How Best to Avoid Dying. He's also the writer and director of the psychological horror film Follow. His pieces have appeared in HuffPost and Salon. He cowrote the creative writing guide This Word Now with his wife, poet Jodi Egerton. Egerton also hosts public radio's The Write Up.

Praise
Praise for Hollow Winner of the 2017 PEN Southwest Book Award for Fiction
An NPR Best Book of 2017 "With the kind of grace not usually seen in accessible modern fiction, Egerton also invokes many other things with this central metaphor . . . Ollie's voice is one of the most believable I've encountered this year, sustained by honesty, realism, and compassion. In his exile, Ollie has taken stock. His reckoning with the past creates the story's exquisite tension and makes the final scene bloom with tenderness . . . The core of Hollow is anything but." --NPR "An incredibly imaginative examination of grief, faith, and the relationship between the two. Egerton spins out the story of Oliver Bonds, a former religious studies professor who loses everything when his toddler son dies under mysterious circumstances and Bonds' involvement is scrutinized. Three years later, Bonds is living alone in a remote shack and eating at the soup kitchen he once volunteered for. A grifter with a belief in 'hollow earth' conspiracy theories is the unlikely catalyst for Bonds' rebirth, as he latches onto a new kind of faith in his search for solace. An unexpectedly thrilling story of sadness and belief." --Barnes & Noble Reads pick, 12 Must-Read Indie Novels "Oliver Bonds, the protagonist of Austin writer Owen Egerton's third novel, Hollow, is a modern-day Job: a beloved religious studies professor at the University of Texas who, after his toddler son dies, hits bottom--and believes he might find some sort of solace in an undiscovered land at the center of the earth. There's profound sorrow to be found here, but great wit too: 'I pictured my monthly paycheck stretched over our expenses like a queen sheet on a king-sized bed.'" --Texas Monthly "Hollow grabs you, startlingly, with the poetry of its first sentence...and follows up with sardonic wit...and an existential quest...Hollow is off-beat, poignant, ultimately beguiling literary fiction." --Lone Star Literary Life "A portrait of heartbreak and loss of faith so wretched it may leave readers with raw nerves." --Kirkus Reviews "Hollow is a work with an animate, vibrant, and awe-inducing core." --Foreword Reviews "Surrounded by characters in various states of mourning, this narrative is a raw and beautiful exploration of grief and guilt." --Read It Forward "I was blown away by Owen Egerton's achingly beautiful, compulsively readable tale of a man who has lost his son, and himself. Hollow is filled to the brim with wonder and the sadness of being human, and I found myself laughing and tearing up on the same page. This is an adventure story with a tremendous heart. I couldn't put it down." --Sarah Hepola, author of Blackout: Remembering The Things I Drank To Forget "I've long been a fan of Egerton's dark, probing, and often hilarious novels, but Hollow takes it to the next level. Egerton has crafted a beautifully strange modern take on the 'Book of Job' populated with haunting and hilarious characters worthy of Vonnegut's best. A meditation on grief and love, Hollow is simultaneously heart wrenching and laugh-out-loud funny." --Amanda Eyre Ward, author of The Same Sky "Owen Egerton has always used his abundant comedic gifts to explore serious, complex subjects--e.g., human frailty, faith and morality, love and connection, the funhouse of contemporary American culture--and Hollow is the book in which it all comes together, the work of a copiously talented writer at the top of his game. Our protagonist, a contemporary Job buckling under the weight of profound suffering and loss--his own, and that of those who surround him, too--is primed for a hero's journey that will get him right with the world again. But Hollow is a surprising book, one that eschews the expected, and his journey ends up being very different from the one he--or the reader--expects. There are no easy answers or tidy resolutions, but there's hard-won grace and a hell of a lot of humor along the way." --Doug Dorst, author of S. "In Hollow, Owen Egerton has fashioned a heartbreaking, tragic, yet funny novel about a man facing a tragedy that would be, in anyone else's hands, almost impossible to read, but that, in his hands, is a story difficult to put down." --Manuel Gonzales, author of The Miniature Wife and Other Stories and The Regional Office is Under Attack!