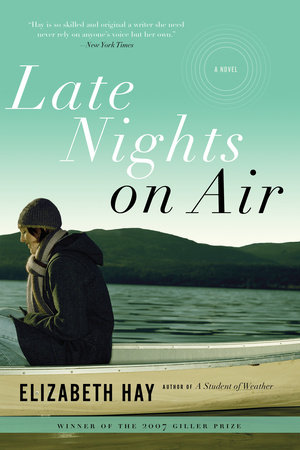 The Giller Prize–winning novel from the #1 bestselling author of All Things Consoled. “A pleasure from start to finish” (Toronto Star).

It’s 1975 when beautiful Dido Paris arrives at the radio station in Yellowknife, a frontier town in the Canadian north. She disarms hard–bitten broadcaster Harry Boyd and electrifies the station, setting into motion rivalries both professional and sexual.

As the drama at the station unfolds, a proposed gas pipeline threatens to rip open the land and inspires many people to find their voices for the first time. This is the moment before television conquers the north’s attention, when the fate of the Arctic hangs in the balance.

After the snow melts, members of the radio station take a long canoe trip into the Barrens, a mysterious landscape of lingering ice and infinite light that exposes them to all the dangers of the ever–changing air.

Spare, witty, and dynamically charged, this compelling tale embodies the power of a place and of the human voice to generate love and haunt the memory.

“Hay’s writing is so alluring and her lost souls so endearing that you’ll lean in to catch the story’s delicate developments as these characters shuffle along through quiet desperation and yearning.” —The Washington Post

“Hay’s spare, nuanced writing reflects the landscape of northern Canada . . . The novel unfolds as a long, lovely examination of how we learn to see ourselves in the places we choose to live.” —The Associated Press

Elizabeth Hay is the author of five books, including Small Change and A Student of Weather. Her books have been shortlisted for a number of awards, including Canada's two most prestigious, The Governor General's Award and the Giller Prize. She recently won the Marian Engle Award for a woman writer in mid-career. She lives in Ottawa.

"Elizabeth Hay has created her own niche in Canadian fiction by fastening her intelligence on the real stuff -- the bumps and glories in love, kinship, friendship."
-- "Toronto Star"
"Hay exposes the beauty simmering in the heart of harsh settings with an evocative grace that brings to mind Annie Proulx."
-- "Washington Post"

"From the Hardcover edition."