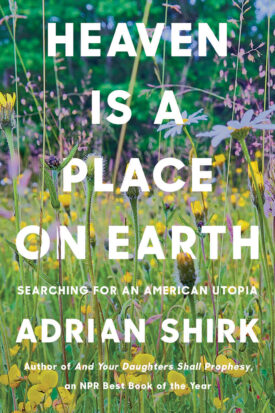 Heaven Is a Place on Earth

Searching for an American Utopia

An exploration of American ideas of utopia through the lens of one millennial’s quest to live a more communal life under late-stage capitalism.

Told in a series of essays that balance memoir with fieldwork, Heaven Is a Place on Earth is an idiosyncratic study of American utopian experiments—from the Shakers to the radical faerie communes of Short Mountain to the Bronx rebuilding movement—through the lens of one millennial’s quest to create a more communal life in a time of unending economic and social precarity.

When Adrian Shirk’s father-in-law has a stroke and loses his ability to speak and walk, she and her husband—both adjuncts in their midtwenties—become his primary caretakers. The stress of daily caretaking, navigating America’s broken health care system, and ordinary twenty-first-century financial insecurity propels Shirk into an odyssey of American utopian experiments in the hopes that they might offer a way forward.

Along the way, Shirk seeks solace in her own community of friends, artists, and theologians. They try to imagine a different kind of life, examining what might be replicable within the histories of utopia-making, and what might be doomed. Rather than “no place,” Shirk reframes utopia as something that, according to the laws of capital and conquest, shouldn’t be able to exist—but does anyway, if only for a moment.

ADRIAN SHIRK is an essayist and memoirist. She is the author of And Your Daughters Shall Prophesy, named an NPR Best Book of 2017. Shirk was raised in Portland, Oregon, and has since lived in New York and Wyoming. She is a frequent contributor to Catapult, and her essays have appeared in The Atlantic and Atlas Obscura, among other publications. Currently, she teaches in Pratt Institute’s BFA Creative Writing Program, and lives at the Mutual Aid Society in the Catskill Mountains.