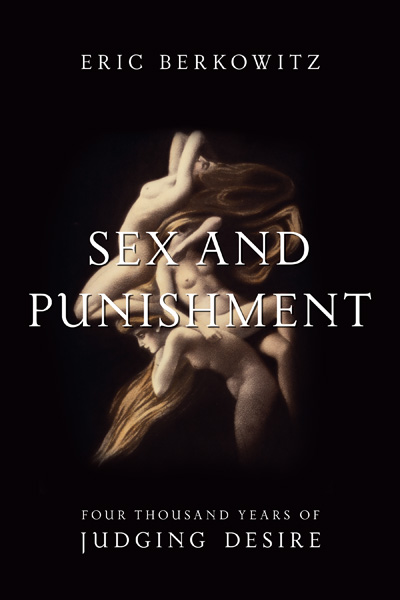 The “raging frenzy” of the sex drive, to use Plato’s phrase, has always defied control. However, that’s not to say that the Sumerians, Victorians, and every civilization in between and beyond have not tried, wielding their most formidable weapon: the law. At any given point in time, some forms of sex were condoned while others were punished mercilessly. Jump forward or backward a century or two (and often far less than that), and the harmless fun of one time period becomes the gravest crime in another. Sex and Punishment tells the story of the struggle throughout the millennia to regulate the most powerful engine of human behavior.

Writer and lawyer Eric Berkowitz uses flesh–and–blood cases—much flesh and even more blood—to evoke the entire sweep of Western sex law, from the savage impalement of an ancient Mesopotamian adulteress to the imprisonment of Oscar Wilde in 1895 for “gross indecency.” The cast of Sex and Punishment is as varied as the forms taken by human desire itself: royal mistresses, gay charioteers, medieval transvestites, lonely goat–lovers, prostitutes of all stripes, London rent boys. Each of them had forbidden sex, and each was judged—and justice, as Berkowitz shows, rarely had much to do with it.

With the light touch of a natural storyteller, Berkowitz spins these tales and more, going behind closed doors to reveal the essential history of human desire.

Huffington Post, AlterNet and Salon. He has been interviewed widely for radio and television including for the History Channel's recent 9–partseries, "How Sex Changed the World." He lives in Los Angeles, California.

Praise for Sex and Punishment

"Enormously informative and entertaining. . .There may be no better lens through which to understand how a particular culture sees itself than its laws pertaining to sex [and] Berkowitz has a keen eye for ridiculous laws and a historian's grasp of the meaning behind them. . . [The book] cries out for a sequel."—Boston Globe

"[An] extraordinary book. . . I don't think I've ever read such an entertaining historical work. It has the wisdom granted by perspective, without the condescension of someone who thinks we're wiser than our ancestors. Whether you want to fuel your indignation, or simply furnish yourself with enough jaw–dropping data to galvanize a hundred party conversations, you really must shell out for this book. It's worth every penny."—The Guardian

"Sex and Punishment is an illuminating and deftly told account of the two urges that have done so much to define civilization: humanity's appetite for sex and its concern to regulate the consequences. As Eric Berkowitz shows, both impulses have been in flux for centuries, and his colorful history serves as a timely reminder of just how arbitrary—and ludicrous—the moral certainties of one era can appear to the next." —Sadakat Kadri, author of The Trial: A History, from Socrates to O. J. Simpson

"Berkowitz describes the real stories of medieval cross–dressers, London's rent boys, gay charioteers, and a whole lot of people who were judged for their forbidden sex. The book makes for an excellent, fascinating, and provocative read about carnal desire and what lengths humankind will go to fulfill and control it." —The Advocate

"It's rare that a book so well researched and provocative is also so downright entertaining. Sex and Punishment will have you gripped and fascinated (and sometimes laughing out loud) at how legal systems over the millennia have attempted to regulate mankind's unruly carnal desires. The chapter on ancient Mesopotamia alone is worth the price of the book." —Tony Perrottet, author of Napoleon's Privates and The Sinner's Grand Tour

"In Sex and Punishment, Eric Berkowitz leads us through the inventive and ultimately futile ways that mankind has tried to tame its most troublesome pleasure. His compehensive tour is sometimes funny, more often scary but always entertaining." ––A. J. Langguth, author of Patriots: The Men Who Started the American Revolution

"There may be no question more vexing than 'What is normal human behavior?' and no facet of 'normality' more arbitrarily defined—and viciously policed—than sexual morality. Eric Berkowitz has done an excellent job of showing just how far from certain any of us should be that we really know what is 'normal' or 'ethical' when it comes to human sexuality. Sex and Punishment is built on solid scholarship and spiced with plenty of sordid details that will make you the hit of any cocktail party." —Christopher Ryan, author of Sex at Dawn: The Prehistoric Origins of Modern Sexuality
Don't miss news & events from Counterpoint Press.
Subscribe to the newsletter today.