ADRIAN SHIRK is an essayist and memoirist. She is the author of And Your Daughters Shall Prophesy, named an NPR Best Book of 2017. Shirk was raised in Portland, Oregon, and has since lived in New York and Wyoming. She is a frequent contributor to Catapult, and her essays have appeared in The Atlantic and Atlas Obscura, among other publications. Currently, she teaches in Pratt Institute’s BFA creative writing program and lives at the Mutual Aid Society in the Catskill Mountains. 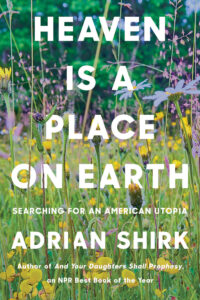 Heaven Is a Place on Earth

Searching for an American Utopia

Told in a series of essays that balance memoir with fieldwork, Heaven Is a Place on Earth is an idiosyncratic study of American utopian experiments—from the Shakers to the radical faerie communes of Short Mountain to the Bronx rebuilding movement—through the lens of one woman’s quest to create a more communal life in a time of unending economic and social precarity.

When Adrian Shirk’s father-in-law has a stroke and loses his ability to speak and walk, she and her husband—both adjuncts in their midtwenties—become his primary caretakers. The stress of these new responsibilities, coupled with navigating America’s broken health-care system and ordinary twenty-first-century financial insecurity, propels Shirk into an odyssey through the history and present of American utopian experiments in the hope that they might offer a way forward.

Along the way, Shirk seeks solace in her own community of friends, artists, and theologians. They try to imagine a different kind of life, examining what might be replicable within the histories of utopia-making, and what might be doomed. Rather than “no place,” Shirk reframes utopia as something that, according to the laws of capital and conquest, shouldn’t be able to exist—but does anyway, if only for a moment. 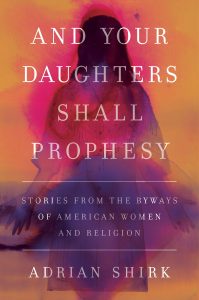 And Your Daughters Shall Prophesy

Stories From the Byways of American Women and Religion

“Shirk is a generous writer whose penchant for detail and poetic observation will surprise even the staunchest skeptic.” —Juan Vidal, NPR’s “Best Books of 2017”

"Shirk writes with sincerity. In these stirring vignettes, she mixes historical accounts, interpretations, and fictionalized encounters to provide insight into her personal journey tracing the steps of American women who have sought out an alternative spirituality."" —Publishers Weekly

“Shirk’s first book examines and exalts the often overlooked histories of religious movers and shakers . . . and offers as a timely antidote to our culture’s current schism between fundamentalist conservatism and radical progress . . . Divine.” —Bitch

And Your Daughters Shall Prophesy is a powerful, personal exploration of American women and their theologies, weaving connections between Adrian Shirk's own varied spiritual experiences and the prophetesses, feminists, and spiritual icons who have shaped this country. Each woman presents a pathway for Shirk’s own spiritual inquiries: the New Orleans high priestess Marie Laveau, the pop New Age pioneer Linda Goodman, the prophetic vision of intersectionality as preached by Sojourner Truth, “saint” Flannery O’Connor, and so many more. Through her journey, Shirk comes to believe that, as the culture wars flatten religious discourse and shred institutional trust, we should look to the spiritual visions and innovations of women, who, having spent so much time at the margins of religious discourse, illuminate its darkened corners.