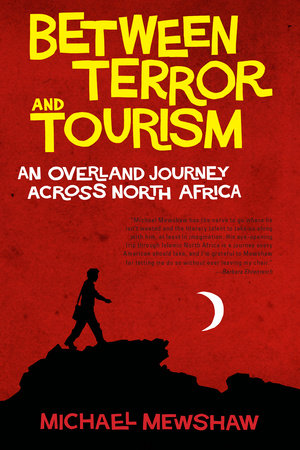 Between Terror and Tourism

An Overland Journey Across North Africa

For his 65th birthday, acclaimed novelist Michael Mewshaw took a 4,000–mile overland trip across North Africa. Arriving in Egypt during food riots, he heads west into Libya, where billions in oil money have produced little except citizens eager to flee to Europe or join the jihad in Iraq. In Tunis, Mewshaw visits an abandoned Star Wars movie set where Al Qaeda has just kidnapped two tourists.

Ignoring U.S. Embassy warnings he crosses into Algeria, traveling through mountain towns and seething metropolises where 200,000 people have died during more than a decade of sectarian violence. Searching for the tombs of seven monks murdered by Islamic fundamentalists, he reaches a village where six more people have been beheaded the day before. When he interviews a repentant terrorist responsible for 5,000 deaths, the man praises the Boy Scouts for training him.

By contrast, the Moroccan city of Tangier seems almost tame. But then he meets the last literary protégé of Paul Bowles who accuses Bowles of plagiarism and murder. In the end, the reader, like the author, is immersed in a fascinating adventure that’s sometimes tragic, often funny, occasionally terrifying and always a revelation of a strange place and its people.

Michael Mewshaw’s five–decade career includes award–winning fiction, nonfiction, literary criticism, and investigative journalism. He is the author of the nonfiction works Sympathy for the Devil: Four Decades of Friendship with Gore Vidal and Between Terror and Tourism; the novel Year of the Gun; and the memoir Do I Owe You Something? He has published in The New York Times, The Washington Post, Los Angeles Times, and numerous international outlets. He spends much of his time in Key West, Florida.

Praise for Between Terror and Tourism

"Mewshaw, an intrepid travel writer and prolific novelist (Year of the Gun; Shelter from the Storm), celebrated his 65th birthday by taking an astonishing but somewhat hapless journey across North Africa. Sprinkling his account with literary allusions, he starts in Alexandria, Egypt, heads west through Libya, backtracks to Egypt, and continues on to Tunisia, Algeria, and Morocco, revealing his dogged determination, edgy fearlessness, and knack for faithful dialog. Seasoned travelers will sympathize with the cultural misunderstandings and bureaucratic troubles encountered in various places, particularly Libya. Mewshaw admits that "travel is a need as urgent as oxygen." That urgency is evident in each well–turned phrase and incisive observation. Verdict: Recommended for Arabists and libraries with larger travel collections. Readers who enjoyed Michael Benanav's Men of Salt will appreciate this book." —Library Journal

"I have been an admirer of Michael Mewshaw's writing for some thirty years. Perhaps the highest compliment I can pay Mewshaw is to admit that I was once fired from a job for reading him, or more accurately, for being unable to stop reading him."